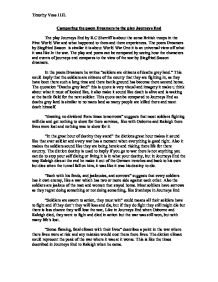 Comparing the poem Dreamers to the play Journeys End

Comparing the poem Dreamers to the play Journeys End The play Journeys End by R.C Sherriff is about the some British troops in the First World War and what happened to them and there experiences. The poem Dreamers by Siegfried Sasson is similar it is about World War One it is an universal view off what it was like In the war. The play and poem can be compared by seeing how the characters and events of journeys end compares to the view of the war by Siegfried Sasson dreamers. In the poem Dreamers he writes "soldiers are citizens of deaths grey land." This could imply that the soldiers are citizens of the county that they are fighting in, as they have been there such a long time and there battle ground has become there second home. The quotation "Deaths grey land" this is quote is very visual and imagery it make u think about what it must of looked like, it also make it sound like death is alive and is waiting at the battle field for the next soldier. ...read more.

"Each with his fends, and jealousies, and sorrows" suggests that every soldiers has it own enemy, like a war which has two or more side against each other. Also the soldiers are jealous of the man and women that stayed home. Most soldiers have sorrows as they regret doing something or not doing something, like Stanhope in Journeys End "Soldiers are sworn to action, they must win" could means all their soldiers have to fight and if they don't they will loss and die, but if they do fight they still might die but there is less chance they will lose the war, Like in Journeys End when Osborne and Raleigh died, they went to fight and died in action but the war was still won, but with many life's lost. "Some flaming, fatal climax with their lives" describes a point in the war where there lives were at risk and any mistake would cost them there lives. The diction climax could represent the peak of the war where it was at it worse. ...read more.

"In the ruined trenches, lashed with rain" this tells us that the trenches were in barely liveable conditions and the weather made it worse. This is a pathetic falicy as the weather contrasts with what is happening in the war. "Dreaming of things they did with balls and bats..." is just like what Stanhope and Raleigh did when they were home playing cricket. Many of the soldiers would have played cricket at home or some sport with a ball. "Mocked by hopeless longing to regain bank holidays..." this is like the soldiers want to remember the freedom of bank holiday and wish they were free to go home. This is like when Raleigh talks about his summer and how Stanhope dated his sister. "... Picture shows, and spats, and going to the office in the train" all of this would be like a normal day for the soldiers at home, but at war they had none of this only there memories and dream. Many for the soldier will never have a normal day like this as they will be killed on the battle field. ?? ?? ?? ?? Timothy Voss 11JL ...read more.