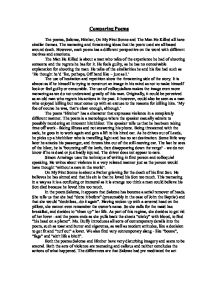 Comparing the poems, Salome, Hitcher, On My First Sonne and The Man He Killed.

Comparing Poems The poems, Salome, Hitcher, On My First Sonne and The Man He Killed all have similar themes. The menacing and threatening ideas that the poets used are all based around death. However, each poem has a different perspective on the word with different motives and emotions. The Man He Killed is about a man who talks of the experience he had of shooting someone and the regrets he has for it. He feels guilty, as he has no conceivable explanation for shooting the man. He talks of the similarities he and his foe had such as 'He thought he'd 'list, perhaps, Off hand like - just as I.' The use of hesitation and repetition show the threatening side of the story. It is almost as if he himself is trying to construct an image in his mind as not to make himself look or feel guilty or censurable. ...read more.

The last he sees of the hiker, he is "bouncing off the kerb, then disappearing down the verge" - we do not know if he is dead or just badly injured. The driver does not appear to care. Simon Armitage uses the technique of writing in first person and colloquial speaking. He writes about violence in a very relaxed manner just as the person would have thought "without a care in the world". On My First Sonne is about a Father grieving for the death of his first Son. He believes he has sinned and that his sin is that he loved his Son too much. This menacing in a way as it is a confusing or immoral as it is strange too think a man could believe his Son died because he loved him too much. In the poem Salome, it appears that Salome has become a serial remover of heads. ...read more.

The differences are that Salome had pre meditated the act whereas the man in the Hitcher committed the act on the spot. Both of the poems are confusing and surreal as Hitcher is about the idea of jealousness compared to Salome, which is about the idea of hatred. Both The Man He Killed and On My First Sonne are menacing in a different way. They both are about guilt and empathy. The Man he Killed is a dramatic monologue of a man confessing to murder whereas On My First Sonne is an elegy to his Son. In On My First Sonne the man is desperate for the reason why his son was taken and feels pain and rage. When compared to The Man He Killed, he is looking for the reason for why he shot him but feels neither pain nor anger. All the poems show menacing and threatening ideas but are not all based around violence. The poets use technical methods to hide a story. They do this by using repetition of words, hesitations and enjambment. ...read more.