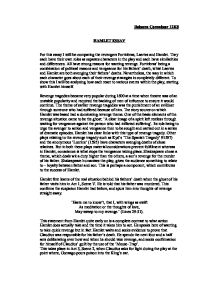 Rebecca Connabeer 12K8 HAMLET ESSAY For this essay I will be comparing the revengers Fortinbras, Laertes and Hamlet. They each have their own roles as separate characters in the play and each have similarities and differences. All have strong reasons for wanting revenge. Fortinbras' being a combination of political reasons and vengeance for his fathers' death, whist Laertes and Hamlet are both avenging their fathers' deaths. Nevertheless, the way in which each character goes about each of their revenge strategies is completely different. To show this I will be analysing how each react to various events within the play, starting with Hamlet himself. Revenge tragedies became very popular during 1600 at a time when theatre was of an unstable popularity and required the backing of men of influence to ensure it would continue. The theme of earlier revenge tragedies was the punishment of an evildoer through someone who had suffered because of him. The story source on which Hamlet was based had a dominating revenge theme. One of the basic elements of the revenge situation came to be the ghost: 'A clear image of a spirit left restless through waiting for vengeance against the person who had inflicted suffering'. Its role being to urge the avenger to action and vengeance then to be sought and carried out in a series of dramatic episodes. Hamlet has clear links with this type of revenge tragedy. Other plays relating to the revenge tragedy such as Kyd's 'The Spanish Tragedy' 91587) and the anonymous 'Locrine' (1595) have characters avenging deaths of close relatives. But in both these plays material considerations prevent fulfilment whereas in Hamlet, conscience is what stops the vengeance taking place. Shakespeare chose a theme, which deals wit a duty higher than the others, a son's revenge for the murder of his father. Shakespeare humanizes the play, gives the audience something to relate to - loyalty between father and son. ...read more.

'O most pernicious woman! O villain, villain; smiling, damned villain! (Lines 105-106). Hamlet does not have the character to be a revenger, he can say he words, make promises to himself and others but when faced with the situation he cannot do it. Laertes has similarities with Fortinbras in the way he conducts his revenge - he too is a man of action, and unlike Hamlet ready to fight anyone who he thinks may have had something to do with his father's death. His readiness to believe that Hamlet is responsible for all the tragic events in the court during his absence and his willingness to go farther than the King to ensure that Hamlet will be killed in the fencing are witness to this. He is a very powerful character and behaves in a way Hamlet wishes he himself could act. Laertes is extremely angry, he thinks that Polonius should have been given a better burial and this spurs on his desire for revenge. In Act IV scene V it is announced that Laertes has burst into the court with a band if men threatening the lie of the king, whom he takes to be his father's killer. Claudius knows that he must have Laertes on his side in order to keep the Danes on his side and to hold his position as king. He is scared Laertes will lead the Danes against him. So, almost immediately he devises a plan to keep Laertes on his side and protect himself from Hamlet at the same time. In other words, he uses Laertes to scheme against Hamlet, to save his own life. When Laertes returns from France Claudius jumps on the opportunity provided by Laertes' fury at his father's death. The King skilfully quietens Laertes and leads him to the plot by which Laertes will be the instrument of Hamlet's death, as the king desires. ...read more.

This shows the total collapse of Denmark caused by the corruption and the revenge led by the characters throughout the play. Claudius' efforts to kill hamlet paid off, but he got killed in the process, as well as his wife, therefore losing his position as King. Hamlet got revenge on Claudius but it was perhaps not justified. Laertes got his revenge on Hamlet but in the end made peace with him by asking Hamlet for an exchange of forgiveness, he wants them to die as friends. Many people have questioned why hamlet delayed his revenge, but there really is nothing surprising about it. It is one of the ways in which Shakespeare links hamlet to everyday life, to show him as human. It is the nature of all human beings to put off a searching task or an impelling duty involving something disagreeable or worse. (A man who has to write a difficult letter will tidy his desk e.g. before he begins). So with Hamlet; the delay is simple and can be matched with a similar inclination in us all. Shakespeare humanized Hamlet; the evidence talked about in this essay suggests that Hamlet is really delaying action because it is human to do so, and not part of his character. The events of the last scene are not what the audience would have expected to happen. One way to explain this is that Shakespeare wanted to disrupt the conventions of classical tragedy, which he may have seen as too heavily laden with stereotypes. His Macbeth, Othello, Brutus, even his King Lear, are, from the first act, so imprisoned in conventional attitudes that they become perfectly predictable. But, not in Hamlet; Shakespeare surprises us at each turn, it is the unpredictable, which dominates, and the final scene has only tenuous connections with the first act. Maybe Shakespeare chose in the final analysis only to present the themes, which for him had any fundamental importance: doubt and uncertainty therefore perhaps anticipating the theatre of the absurd and making it so popular. ...read more.