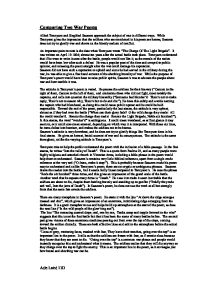 Comparing Two War Poems Alfred Tennyson and Siegfried Sassoon approach the subject of war in different ways. While Tennyson gives the impression that the soldiers who are mentioned in his poem are heroes, Sassoon does not try to glorify war and shows us the bloody realism of conflict. An important point to note is the date when Tennyson wrote "The Charge Of The Light Brigade". It was written on April 10 1864; almost ten years after the actual battle took place. Tennyson understood that if he were to write it soon after the battle, people would not like it, as the morale of the nation would have been low after such a defeat. He was a popular poet of the time and swayed to public opinion, and releasing the poem straight after the war could damage his reputation. Sassoon did not have such a reputation to uphold and since he had served in the military during the war, he was able to give a first hand account of the shocking brutality of war. ...read more.

Sassoon's contains very little biblical reference, apart from a single crude reference at the very end ("O Jesus, make it stop!"). This is probably because Sassoon made his poem easy to understand and unlike Tennyson's poem, there are no cryptic or ambiguous phrases. Sassoon draws the reader into the battle, but it seems fairly linear compared to Tennyson's. He uses the phrase "Rode the six hundred" three times, and this gives an impression of the grand scale of the battle. Another word that he repeats many times is "Death." He uses it to make it seem inevitable that the soldiers are about to die, despite them battling bravely and standing up to gunfire ("Boldly they rode and well, Into the jaws of Death"). In Sassoon's poem, he does not use the word at all but strongly hints that the same fate awaits the soldiers. There are many metaphors in Sassoon's poem. He starts it with the ljne "At dawn the ridge emerges massed and dun", which gives an impression of an enormous, intimidating ridge emerging from the darkness. ...read more.

Sassoon does not glorify war at all. Although Tennyson does not use many metaphors, he uses other effects such as alliteration, repetition and anaphora to great effect. His first line ("Half a league, half a league, Half a league onward") is anaphoric. He uses is to good effect and makes it sound like horses hooves clattering rhythmically on the ground. One instance where he uses repetition to good effect is in the fourth stanza ("Cannon to the right of them, Cannon to the left of them, Cannon behind them"). This tells us that they were surrounded, with nowhere to go but they fought on bravely and is very atmospheric. Also in the fourth stanza, which seems to be the main stanza describing battle, he writes "Reel'd from the sabre-stroke, Shatter'd and sunder'd". This is a good example of alliteration. He makes the soldiers seem down and out, shaken by the battle and with no energy left, only for them to ride heroically back into the valley. While he does not glorify war in any way, he celebrates the soldiers who died during the battle and turns their defeat into heroism. Adie Laird 11D ...read more.