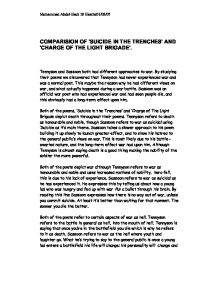 Comparision of 'Suicide In the Trenches' and 'Charge of the Light Brigade'.

COMPARISION OF 'SUICIDE IN THE TRENCHES' AND 'CHARGE OF THE LIGHT BRIGADE'. Tennyson and Sassoon both had different approaches to war. By studying their poems we discovered that Tennyson had never experienced war and was a normal poet. This maybe the reason why he had different views on war, and what actually happened during a war battle. Sassoon was an official war poet who had experienced war and had seen people die, and this obviously had a long-term effect upon him. Both of the poems, 'Suicide in the Trenches' and 'Charge of The Light Brigade depict death throughout their poems. Tennyson refers to death as honourable and noble, though Sassoon refers to war as suicidal using 'Suicide as it's main theme. Sassoon takes a slower approach to his poem building it up slowly to launch greater effect, and to show his hatred to the general public's views on war. This is most likely due to his battle-wearied nature, and the long-term effect war had upon him. ...read more.

Tennyson uses metaphors as his poem is about poetry. Valley of death and mouth of hell are some examples of metaphors used throughout his poem. Tennyson uses a lot of repetition in his poem, as he tries to pass out his message about how noble these soldiers are and how they should be recognised for their bravery. Honour the light brigade, noble six hundred. Sassoon doesn't use repetition of this format. His repetition is about the living conditions soldiers live through; the reason being is partly because he lived in the trenches, being a war poet he stayed in the trenches for a considerably long time. Overall both poets have different views on war although; Tennyson's poem is historically twisted and terribly biased, but Sassoon's was a historical piece of evidence due to him being an official war poet his ear experience. Tennyson believes war is human nature, but Sassoon says war is horrid and how it affects people. The reason for this is probably the fact that Sassoon was too affected by the outcome of war and what it did to other people. The poets have different views on war and what it actually does. Mohammad Abdel-Hadi 10 Heaths01/05/07 ...read more.