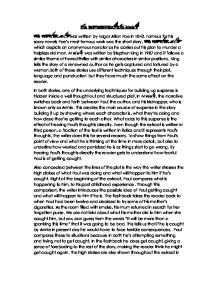 Comparison between The Tell-tale Heart by Edgar Allan Poe and Misery by Stephen King.

The Tell-Tale Heart and Misery The Tell-Tale Heart was written by Edgar Allan Poe in 1843. Famous for his scary novels Poe's most famous work was the short story, The Tell-Tale Heart which depicts an anonymous narrator as he carries out his plan to murder a helpless old man. Misery was written by Stephen King in 1987 and it follows a similar theme of horror/thriller with similar characters in similar positions. King tells the story of a renowned author as he gets captured and tortured by a woman.Both of these stories use different techniques through their plot, language and punctuation but they have much the same effect on the reader. In both stories, one of the underlying techniques for building up suspense is hidden inside a well thought out and structured plot. In Misery, the narrative switches back and forth between Paul the author, and his kidnapper, who is known only as Annie. This creates the main source of suspense in the story building it up by showing where each character is, what they're doing and how close they're getting to each other. What adds to this suspense is the effect of hearing Paul's thoughts directly. Even though the extract is written in third person, a fraction of the text is written in italics and it represents Paul's thoughts. The writer does this for several reasons. To show things from Paul's point of view and what he is thinking at the time in more detail , but also to underline how worried and panicked he is as things start to go wrong. By hearing Paul's thoughts directly the reader gets to understand how fearful Paul is of getting caught. Also concealed between the lines of the plot is the way the writer stresses the high stakes of what Paul was doing and what will happen to him if he's caught. Right at the beginning of the extract, Paul compares what is happening to him, to his past childhood experience. ...read more.

Though this just maybe a sign of over-confidence, it is bordering on madness and another reason for the reader to doubt the judgment of the narrator. If all this strange behaviour isn't enough to chill the reader, then the murderer hallucinating should be. His guilty conscious gets the better of him and he thinks he can hear the imaginary beating of the stopped heart of the dead old man. The narrator succumbs to the noise by confessing to the clueless police sitting in front of him, that he had killed the old man who had lived here. ""Villains!"I shrieked, "Dissemble me no more! I admit the deed!-tear up the planks!-here, here! - it is the beating of his hideous heart!"" The narrator's insane behaviour throughout the story adds to the horror atmosphere of the text. As a final sentence, I would say that Misery ended better than The Tell-Tale Heart in terms of suspense, because it leaves more unexplained questions in reader's mind. This is probably because Misery is an extract and still in the middle of its story, and The Tell-Tale Heart finishes with its last line. As an ending I do believe that the final sentence of The Tell-Tale Heart is satisfying as it gives the reader the bare minimum information for the reader to deduce what happens to the murderer after he confesses instead of just saying that he was arrested and went to prison. After analysing both plots, overall I think that the plot of the Misery extract builds up tension better than The Tell-Tale Heart solely on the belief that it is it's faster-paced therefore much more exciting. The effect of the chosen narrative for The Tell Tale Heart, which is first person and from the narrator's point of view, lets the reader into his/her mind and see their motives and thinking behind an atrocious crime. First person is perfect for The Tell Tale Heart because looking into the murderer's mind is exactly what the reader needs to get a proper grasp of the plot. ...read more.

At the beginning of the story, the narrator begins by asking numerous questions on whether or not the reader believed he was mad or not."How then am I mad?" The effect of these questions and question marks makes the reader feel as if he had contradicted the narrator in some way and the narrator was having an argument with them. This is a good way to show the madness of the narrator from right at the start of the story. Question marks are also used in Misery however for different reasons. Phrases such as "did you chip the paint?" and "did you leave a track?" are used as another way to show Paul's desperation but also to show his own uncertainty as he starts to panic. For these reasons I believe the use of question marks is better in Misery than in The Tell-Tale Heart. Another aspect of the punctuation in Misery is the use of pauses. "Come on . . . come on . . . come on" and "Never . . . never in time . . . She'll hear" are two good examples of where the writer has used pauses to give a sense of desperation and anxiety to Paul's thoughts. To conclude this essay, I would have to say that the extract from Misery by Stephen King is more effective than The Tell-Tale Heart in the way it creates an atmosphere of horror and suspense. It does this by using and expert blend of individually effectual words, well structured plot, effective narrative, well thought out and carefully placed punctuation, and a wide range of long and short sentences. Although The Tell Tale Heart does contain most of the techniques stated above, one thing I think Misery does better, and what makes it the better piece of text, is hidden inside its suspenseful plot line where Paul is constantly in a state of desperation and anxiety and in almost immediate danger. This I think is lacking in The Tell-Tale Heart, the sense of immediate danger, and is what makes the extract from Misery the perfect horror/suspense text. ...read more.