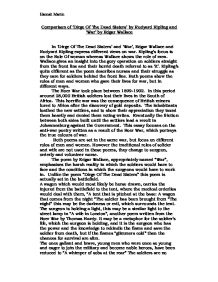 Comparison of 'Dirge Of The Dead Sisters' by Rudyard Kipling and 'War' by Edgar Wallace In 'Dirge Of The Dead Sisters' and 'War', Edgar Wallace and Rudyard Kipling express different views on war. Kipling's focus is on the Role Of woman whereas Wallace shows the role of men. Wallace gives an insight into the gory operation on soldiers straight from the front line and their horrid death referred to as 'it'. Kipling's quite different as the poem describes nurses and their struggle as they care for soldiers behind the front line. Both poems show the roles of men and women who gave their lives for war, but in different ways. The Boer War took place between 1899-1902. In this period around 28,000 British soldiers lost their lives in the South of Africa. This horrific war was the consequence of British miners lured to Africa after the discovery of gold deposits. The inhabitants loathed the new settlers, and to show their appreciation they taxed them heavily and denied them voting writes. Eventually the friction between both sides built until the settlers lead a revolt in Johannesburg against the Government. This essay focuses on the anti-war poetry written as a result of the Boer War, which portrays the true colours of war. Both poems are set in the same war, but focus on different roles of men and women. ...read more.

The "Waterproof cover" would most likely be the roof of the tent, which kept them out of the worst of the weather. "Nought" this is slang in some Northern dialects for "nothing". The soldier is a mess from the enemy bullet he received "The limp mangled work of a gun" Wallace once again uses a metaphor for the soldier's life, he links the flickering light within the tent to the soldier's soul, the light flickers in a similar fashion to the street lamp in the poem "A wife in London". The flickering may show that the flame is dying and as the flame dies so does the soldier, "The flickering light of a soul. The wounded man is described as "The Wreck" The surgeon orders the orderly to hold the patients hand, this may be because the surgeon knows that he is going to die and feels that it would be more humane if he were to die with the comfort of someone being beside him, even if it is a complete stranger. The surgeon uses chloroform to put the patient out, "A sigh as the chloroform drips" The soldier slowly dies. "Bluer and bluer the lips" The soldier is totally dehumanised by the surgeon, which shows the harsh reality, as the surgeons must have no sentimental attachments, "Orderly, take It out" The orderly prepares for the next patient, they have no idea who it ...read more.

The sisters may be suggested to be Saints, as "All-hallows" is a less common term for All Saints Day, a day where the past Saints must be remembered, "In the open camp all-hallowed" The poet describes the nurses as "Patient, wise and mirthful..."This poem is a poem of great sympathy and passion; it reflects the physical and mental torture, which the nurses would deal with. The comparisons between the two poems are that they both are anti-war and consider the consequences of war wither involved directly or in-directly. The poem 'war is presented as a formal poem with regular stanzas with a strong rhythm and rhyme pattern. This has the effect of emphasising the relentless work on injured bodies. In comparison 'Dirge Of The Dead Sisters' looks less formal, the poem is structured in stanzas but with rhyme pattern perhaps reflecting the disturbed lives of the Sisters. The use of enjambment helps to give the idea of the Sisters carrying on in difficult circumstances. Also much of the poem is written in parenthesis and if looked out without the lines in brackets show that the lines in brackets show the reality of the situation. In this respect both poems show the usually unseen side of war, "the part that is not for show". I think these poems are very similar and show the different roles of men and women thought the same war. Hannah Martin ...read more.