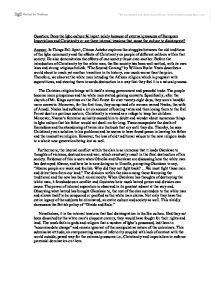 Question: Does the Igbo culture fall apart solely because of external pressures of European Imperialism and Christianity or are there internal tensions that cause the culture to disintegrate? Answer: In Things Fall Apart, Chinua Achebe explores the struggles between the old traditions of the Igbo community and the effects of Christianity on people of different calibers within that society. He also demonstrates the effects of one society thrust onto another. Before the introduction of Christianity by the white man, the Ibo society has been well-settled, with its own laws and strong religious beliefs. "The Second Coming" by William Butler Yeats describes a world about to reach yet another transition in its history, one much worse than the prior. ...read more.

Christianity is viewed as a refuge to keep her children. Moreover, Nwoye's feminine curiosity caused him to doubt and wonder about numerous things in Igbo culture that his father would not dwell on for long. These encapsulate the death of Ikemefuna and the abandoning of twins into the bush that cry until they die. Thereby, he sees Christianity as a solution to his problems and he seems to have found peace in leaving his father and the insensitive religion. However, the loss of old traditional values to the new religion leads to a whole new generation being lost as well. Furthermore, the internal conflict within the clan is so immense that it leads Okonkwo to thoughts of violence, destruction and war, which eventually result in the final destruction of his society. ...read more.

Not only they have the entire legacy of the subjects be eliminated, an entire culture and society as well. This vividly showcases the British policy of "Divide and Rule." Nonetheless, it is the internal tensions that fuel disintegration in the Ibo culture. Had they not been disunited by the white man's eloquent oratory, they would have fought for their rights and land. The weak faith in gods and religion that a number of Igbo's possessed, led them to "accommodate change" and remain ignorant of the manipulative nature of the colonizers. This submissive attitude, an overpowering sense of inferiority coupled with lack of contact with the world outside, paved way for the external pressures i.e., Christianity and imperialism to enforce perennial domination on them. ...read more.