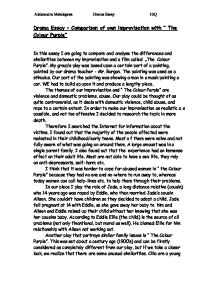 Comparison of own improvisation with &quot; The Colour Purple&quot;.

Drama Essay - Comparison of own improvisation with " The Colour Purple" In this essay I am going to compare and analyse the differences and similarities between my improvisation and a film called "The Colour Purple". My group's play was based upon a certain part of a painting, painted by our drama teacher - Mr. Burgon. The painting was used as a stimulus. Our part of the painting was showing a man in a mask painting a car. WE had to build up upon it and produce a lengthy piece. The themes of our improvisation and " The Colour Purple" are violence and domestic problems, abuse. Our play could be thought of as quite controversial, as it deals with domestic violence, child abuse, and r**e to a certain extent. In order to make our improvisation as realistic as possible, and not too offensive I decided to research the topic in more depth. Therefore I searched the Internet for information about the victims. I found out that the majority of the people affected were molested in their childhood/early teens. ...read more.

He blamed Ellie for him relationship with Alison not working out. Another play that portrays similar family issues is " The Colour Purple". This was set about a century ago (1900's) and can be firstly considered as completely different from our play, but if we take a closer look, we realize that there are some unusual similarities. Cilia are a young black youth, who at 14 was raped twice by her father. He is a r****t and an abuser. As a result to the rapes Cilia gives birth to two children: Olivia and Adam, who are taken away from her. Surprisingly a very similar situation occurs in my play where Eddie rapes Jade and he takes her baby to bring up as his own with Alison. In "The Colour Purple" Celia is shown as a young vulnerable girl, who gets raped by her father, then chucked out the house. She was forced to marry a grown-up man and move in with him. But that is not the end to her troubles. ...read more.

Whereas Cilia, doesn't tell anyone about her troubles, she keep it all inside her. They deal in different way, but yet the abuse is very similar. Both characters get raped ( Cilia and Jade), both character are abused by their fathers ( Cilia and Ellie). I have noticed that the different things that happened throughout my play to 3 different characters( Jade, Ellie Alison) happened to one character in " The Colour Purple". Also in " The Colour Purple" the husband can't do anything for himself. When he brings home a woman from a bar, he tried to cook for her , but he is completely useless. There is a very similar situation in my play when Alison and Ellie leave Eddie and the flat is very messy, there is rubbish lying around everywhere, empty beer cans, half-eaten ready meals etc. Even though both plays were set about a century apart, they still have many similarities involving family issues such as family status, respect, domestic violence (abuse). They both show how victims cope with the abuse and what effect it has on their lives. Aleksandra Malolepsza Drama Essay 10Q ...read more.