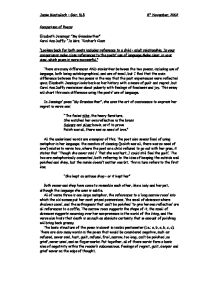 Comparison of Poems Elizabeth Jennings: "My Grandmother" Carol Ann Duffy: "In Mrs. Tilscher's Class "Looking back for both poets includes reference to a child - adult relationship. In your comparisons make close references to the poets' use of language. Make clear, in your view, which poem is more successful." There are many differences AND similarities between the two poems, including use of language, both being autobiographical, and use of smell, but I find that the main difference between the two poems is the way that the past experiences were reflected upon; Elizabeth Jennings looks back on her history with a sense of guilt and regret, but Carol Ann Duffy reminisces about puberty with feelings of fondness and joy. This essay will chart this main difference using the poets' use of language. In Jennings' poem "My Grandmother", she uses the art of consonance to express her regret in verse one: "The faded silks, the heavy furniture, She watched her own reflection in the brass Salvers and silver bowls, as if to prove Polish was all, there was no need of love." All the underlined words are examples of this. The poet also seems fond of using metaphor in her language; the mention of cleaning ('polish was all, there was no need of love') relates to verse two, where the poet as a child refused to go out with her gran, it states that 'Though she never said / That she was hurt, I could still feel the guilt'. ...read more.

Description is also important in portraying happiness in an educational environment: "Enthralling books. The classroom glowed like a sweetshop. Sugar paper. Coloured shapes... The scent of a pencil slowly, carefully shaved." The last verse about the pencil uses punctuation to highlight it's meaning, the part of commas suppresses the reader to take his time reading it, with the same deliberation that a child may take in sharpening the pencil. The poem appears to make a transition as it moves on, both in language and in content. The language becomes more sophisticated as it advances such as a child learning more 'big words' (e.g. 'that for an hour, then a skittle of milk' transcends to 'fractions under a heavy, sexy sky'). The content also changes from childhood innocence ('Some mornings, you found she'd left a gold star by your name') to s****l awareness (see heavy, sexy sky comment, also 'you ran through the gates, impatient to be grown, as the sky split open into a thunderstorm'). The safety disappears as the child finds himself in the real world, but is still happy and 'impatient to be grown'. Mrs Tilscher's refusal to respond ('turned away') to an innocent question about how a child is made hints that an answer might burst the protective bubble she has helped maintain. The beginning of verse three also helps to see how language is used in the idea of children to adults, where ...read more.

the very idea is absurd, and possibly even disturbing that there is such a vast idea that your parents (I know abandon the comparison of the fish) never told you about, and you have been living in blissful and idiotic ignorance of for the best part of a decade. So, the main similarity between the two poems is attempting to grasp complex ideas through childish fingers. A significant difference between the two poems is that of choices. In Jennings' poem, she was given a choice of going out with her grandmother, to which she refused ('I was afraid'), but in "Mrs Tilscher's Class", there is no choice, just an onward plod from the rural village of childhood to the horizon-spanning cityscape of adulthood. It is not a very big difference, but for me, is the most prominent and makes all the difference. To evaluate, I have analysed my main difference according to language and the quality of the child - adult relationship, and find (drum-roll) "In Mrs Tilscher's Class" to be the more successful in outlining the two points listed above. Not only does Carol Ann Duffy use language to convey the significance and fragility of a child - adult relationship towards the reader, but is intelligent enough to use punctuation too. Such examples are the quotes about tadpoles, and Brady and Hindley. ...read more.