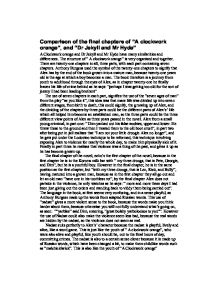 Comparison of the final chapters of "A clockwork orange", and "Dr Jekyll and Mr Hyde" A Clockwork orange and Dr Jekyll and Mr Hyde have many similarities and differences. The structure of " A clockwork orange" is very organised and together. There are twenty-one chapters in all, three parts, with each part containing seven chapters. Anthony Burgess used the symbol of the twenty-one chapters to signify that Alex has by the end of the book grown into a mature man, because twenty-one years old is the age at which a boy becomes a man. The book therefore is a journey from youth to adulthood through the eyes of Alex, as in chapter twenty-one he finally leaves his life of crime behind as he says: "perhaps I was getting too old for the sort of jeezny I had been leading brothers" The use of seven chapters in each part, signifies the use of the "seven ages of man" from the play "as you like it", this idea was that mans life was divided up into seven different stages, from birth to death, this could signify, the growing up of Alex, and the dividing of the chapters by three parts could be the different ...read more.

The way that Pete's wife reacts to nadsat in the final chapter also shows how times have moved on: "" he talks funny, doesn't he?" said this devotchka, like giggling" This shows that all the youth of the first chapter have abandoned nadsat, as they matured too, as Pete says he is nearly twenty-one. Pete also describes that Greg, who has become a new friend of Pete's "runs little parties, you know. Mostly wine cup and word games" The way that Pete now plays word games shows how he still plays with the language of "A clockwork orange", but instead of through nadsat, through word games. This shows how the old youth of a clockwork orange have gone off the violent language of nadsat. By the end of the novel Alex has changed as if by clockwork, because he cannot stop himself growing up into an adult and he knows that he will become one of the bullied people as the new youth are born, and if he has kids that they will go through the same process as he did, just like clockwork and he cannot stop it from happening: " and nor would I be able to stop him. ...read more.

he was small he was full of life when hearing Beethoven, and he has lost that as he has become older, his fun youth days have gone. This is like Dr Jekyll and Mr Hyde because with Jekyll his class binds him, so he cannot be free and have wild fun, but when he is Hyde he is free and youthful: "I was often plunged into a kind of wonder at my vicarious depravity", he is also " younger, lighter, happier", and he gets a " heady recklessness" when Hyde. Stevenson is like Hyde in the sense that, Hyde is a figure of rebellion again the upper class boundaries, and Stevenson did exactly the same as he rebelled against Calvinist beliefs. He could also be seen like Jekyll, bounded because of his class, but Stevenson bounded by his illness, and all the time he wanted to break free, and finally he did, to become an individual, not held back by beliefs, or morals. This novel says that morals and classes cannot bind human nature, people have to become what they become, and there is no stopping that, because as people grow they will change, and rebel against beliefs, which they think, are wrong. ...read more.