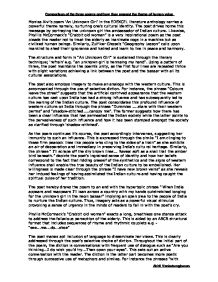 Moniza Alvi's poem 'An Unknown Girl' in the EDEXCEL literature anthology carries a powerful theme namely, nurturing one's cultural identity. The poet drives home this message by portraying the unknown girl the ambassador of Indian culture. Likewise, Phylllis McCormack's "Crabbit old woman" is a very inspirational poem as the poet pleads the reader not to treat the elderly as inanimate cogs in a machine but as civilized human beings. Similarly, Zulfiker Ghose's "Geography Lesson" calls upon mankind to shed their ignorance and hatred and learn to live in peace and harmony. The structure and form in "An Unknown Girl" is sustained through the literary technique; 'refrain' e.g. "an unknown girl is hennaing my hand". Using a pattern of three, the poet maintains the poem's unity, as the first four lines are repeated thrice with slight variations achieving a link between the poet and the bazaar with all its cultural associations. The poet also employs imagery to make an analogy with the western culture. This is accompanied through the use of selective diction. For instance, the phrase "Colours leave the street" suggests that the artificial contrived appearance that the western culture has cast upon India has had a strong influence and has subsequently led to the waning of the Indian culture. The poet consolidates this profound influence of western culture on India through the phrase "Dummies .....stare with their western perms" and "shadow-stitched......canopy me". ...read more.

The diction becomes more euphoric with words such as "mother..love...heart...happy...remembering...dreaming" all recounting the freedom of youth she once enjoyed and relished in. The last turning point marks another mood change from positive to negative and proceeds in a melancholic manner. This begins with the phrase "Dark days are upon me" as the poet brings us up to date by way of indicating what the old woman's present life is like; namely sad, dejecting and fearful. Besides structure and language, the poet incorporates emotive imagery in order to convey a great deal on the unjustly judgement of the old. As we read through the poem, we take note of how Phyllis pertains to the notion of relating to the recollections of the old woman's life. These recollections take on an almost photographic quality, as they are so precise and follow such a logical progression - "at twenty...at forty". This seemingly logical progression gives us a sense of believing that she is turning the pages of an album and creates a shared memory for the reader to relate towards. Significantly even these past memories are described in the present tense, a technique which assists in keeping them fresh and alive in her mind and more importantly the readers mind. Similarly, decrepit images such as "crumbles...old carcass...battered heart" evoke an assertive imagery of the decaying life that the old woman is exposed to and mirrors the disillusionment that has settled in the woman due to ill-treatment. ...read more.

This is illustrated through the phrase "men on the earth found causes to hate each other, to build walls across cities and to kill" whereby the poet points out the vengeance that has permeated mankind. The poet laments man's ignorance through the phrase "From that height, it was not clear why" and, in conclusion, makes an indirect plea to the mankind not to take a narrow view of the petty issues and to take a broad-minded view of the same so that mankind and nature can co-exist in eternal peace. In conclusion, each of the three poems imparts an aspect of human value; "An Unknown Girl" emphasizes the importance of preserving a nation's culture as a unifying fabric; "Crabbit Old Woman" urges the reader to treat the elderly from within the heart rather than on face value; "Geography Lesson" calls upon mankind to shed hatred and learn to live in peace. However, in my judgement, Crabbit Old Woman stands to be the most distinct and powerful poem as it broaches the most touching aspect of human value, moves the reader and effectively conveys an important moral through apt use of diction, imagery and direct form of address. Comparison of the three poems and how they present the theme of human value Comparison of the three poems and how they present the theme of human value Akhil Venkataraghavan Akhil Venkataraghavan ...read more.