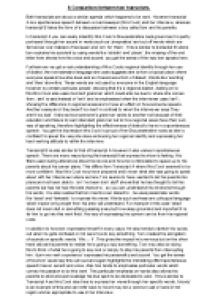 ﻿A Comparison between two transcripts. Both transcripts are about a similar agenda which happens to be work. However transcript A is a spontaneous speech between a road sweeper (Mrs Cook) and her interview, whereas transcript B takes the form of a discussion between a boy called tom and his parents. In transcript A you can easily indentify Mrs Cook?s Gloucestershire background as it is partly portrayed through her accent in words such as ?zineposties? and cut off words which are formed as ?cos? instead of ?because? and ?em? for ?them?. This is similar to transcript B where tom explains his accident by using words like ?skiddin? and ?playin?, the missing of the end letter here shows how his voice and accent; you get the sense of the way tom speaks here. Furthermore we get a real understanding of Mrs Cooks regional identity through her use of dialect, the non-standard language she uses suggests she is from a typical place where everyone speaks how she does and so it becomes a form of dialect. ...read more.

You get the impression Mrs Cook is proud of her Gloucestershire roots as she is confident to speak the way she does embracing her regional identity and expressing her hard working attitude to within the interview. Transcript B is also similar to that of transcript A however it also varies in spontaneous speech. There are many ways during the transcript that express how tom is feeling. His fillers used during utterances show his nerves and how he is intimidated to speak up to his parents about his career plans. This differs from Transcript A where Mrs Cook seemed to be more confident. Also Mrs Cook may have prepared and known what she was going to speak about with her interviewer where as here Tom seems to have wanted to tell his parents his plans and not been able to. ...read more.

?We::::: ll?. This gives the impact he?s nervous but on the other hand allows his parents to realise he is going o say something. Tom may also be doing this to think of what he is going to say next or simply to stop his parents from interrupting him. ?durin me work experience? expresses his personality and accent. You get the sense of how tom would say this out loud and again highlights the interesting effect spontaneous speech has on accent and voice. Also tom tends to emphasise particular words which convey his passion to do this work. This particular emphasis on words also allows his parents to elicit and acknowledge his true spirit to be dedicated to work. This is similar to Transcript A as Mrs Cook also tries to express her views through her specific words. ?b****y? is an example of this and can refer back to how it may be a common use of word in her region and so appropriate to use in her interview. ...read more.