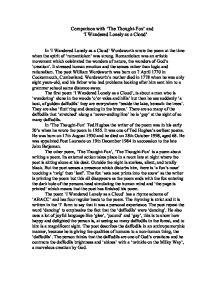 Comparison with 'The Thought-Fox' and 'I Wandered Lonely as a Cloud' In 'I Wandered Lonely as a Cloud' Wordsworth wrote the poem at the time when the spirit of 'romanticism' was strong. Romanticism was an artistic movement which celebrated the wonders of nature, the wonders of God's 'creation'. It stressed human emotion and the senses rather than logic and rationalism. The poet William Wordsworth was born on 7 April 1770 in Cockermouth, Cumberland. Wordsworth's mother died in 1778 when he was only eight years-old, and his father who had problems looking after him sent him to a grammar school some distance away. The first poem 'I Wandered Lonely as a Cloud', is about a man who is 'wandering' alone in the woods 'o'er vales and hills' but then he see suddenly 'a host, of golden daffodils' they are everywhere 'beside the lake, beneath the trees'. They are also 'flutt'ring and dancing in the breeze.' ...read more.

He also uses a lot of joyful language like 'glee', 'jocund' and 'gay', this is to show how happy and delighted the person is, at seeing so many daffodils in the forest, and to him is a magnificent sight. The poet describes the daffodils in an anthropomorphic manner, because he is giving the qualities of humans to a non-human thing, the 'daffodils'. The person thinks that the daffodils are one of God's creations and he contracts the daffodils brightness and 'shines' with a 'twinkle on the Milky Way', a marvelous creation by God. The poem 'The Thought-Fox' has no real rhyme at all; it is enjambment sometimes too, meaning there is no punctuation at the end of some of the stanzas 'something else is alive' and 'beside the clock's loneliness' both have no punctuation at the end of their stanzas. The poem uses a lot of alliteration and's' to give it the quiet silent feeling. ...read more.

But 'I Wandered Lonely as a Cloud' is written from an external experience, where the poet has gone and seen the 'daffodils' then wrote a poem about them and their beauty. The poem 'I Wandered Lonely as a Cloud' started off very peaceful as someone was walking through the countryside forest, but he stumbles upon a 'host, of golden daffodils'. In the 'The Thought-Fox' the poem starts off as lonely and a lifeless atmosphere but later it becomes more alive as a fox comes in to the poem 'suddenly', but is all 'suddenly' all goes, as the fox 'enters the dark hole of the head' and the 'page is printed' and the poem ends. 'The Thought-Fox' is an irregular poem in that there is no rhyme scheme and sometimes there is enjambment whereas in 'I Wandered Lonely as a Cloud' is a regular poem because of the perfect rhyme and punctuation at the end of each stanza also the four steady beats gives it a calm and even feeling about the poem. ...read more.