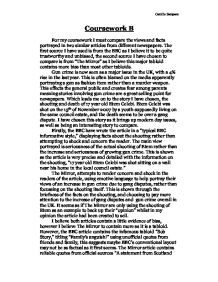 Comparrison between tabloid and broadsheet

Coursework B For my coursework I must compare the views and facts portrayed in two similar articles from different newspapers. The first source I have used is from the BBC as I believe it to be quite trustworthy and unbiased, the second source I have chosen to compare is from "The Mirror" as I believe this major tabloid contains more bias than most other tabloids. Gun crime is now seen as a major issue in the UK, with a 4% rise in the last year. This is often blamed on the media apparently portraying a gun as fashion item rather than a murder weapon. This effects the general public and creates fear among parents meaning stories involving gun crime are a great selling point for newspapers. Which leads me on to the story I have chosen, the shooting and death of 17 year old Etem Celebi. ...read more.

This is shown through the briefness of the facts on the shooting, and choosing to pay more attention to the increase of gang disputes and gun crime overall in the UK. It seems as if The Mirror are only using the shooting of Etem as an example to back up their "opinion" whilst in my opinion the article had been created to sell. I believe both articles contain a little evidence of bias, however I believe The Mirror to contain more as it is a tabloid. However, the BBC article contains the infamous tabloid "Sob Story," titling "Family's anguish!" using unofficial quotes from friends and family, this suggests maybe BBC's conventional layout may not be as factual as it first seems. The Mirror article contains reliable quotes from official sources "A statement from Scotland Yard," to help make the article seem more factual to readers. ...read more.

I believe these shootings are not publicised enough, many people have become bored and overlook headlines containing, "Another teen shot dead." I also believe the death of Etem Celebi and other teenagers to be a major tragedy, however I am not sure many other people my age share this view, as they have not been directly affected. I believe that the issues raised in these articles are of great importance, and in this certain case I believe investigators will continue to look for evidence to see whether the shooting was a gang issue, postcode rivalry or if Etem was simply in the wrong place at the wrong time. In the wider scale of things, I believe that more actions will eventually be introduced in hope to lower gun crime as well as youth crime in general. These could include: More power for police, a form of harsher punishment for offending youths and a longer prison sentence for extreme cases, such as the shooting of Etem. ?? ?? ?? ?? Camille Sampson ...read more.