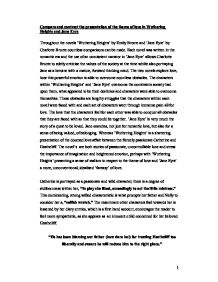 Compare and contrast the presentation of the theme of love in Wuthering Heights and Jane Eyre Throughout the novels 'Wuthering Heights' by Emily Bronte and 'Jane Eyre' by Charlotte Bronte countless comparisons can be made. Each novel was written in the romantic era and the use of an omniscient narrator in 'Jane Eyre' allows Charlotte Bronte to subtly criticise the values of the society at the time whilst also portraying Jane as a heroine with a mature, forward thinking mind. The two novels explore love, how this powerful emotion is able to overcome countless obstacles. The characters within 'Wuthering Heights' and 'Jane Eyre' overcome the constraints society had upon them, what appeared to be their destinies and characters were able to overcome themselves. These obstacles are lengthy struggles that the characters within each novel were faced with and each set of characters went through immense pain all for love. The love that the characters feel for each other was able to conquer all obstacles that they are faced with so that they could be together. 'Jane Eyre' is very much the story of a quest to be loved. Jane searches, not just for romantic love, but also for a sense of being valued, of belonging. Whereas 'Wuthering Heights' is a shattering presentation of the doomed love affair between the fiercely passionate Catherine and Heathcliff. The novel's are both stories of passionate, uncontrollable love and stress the importance of imagination and heightened emotion, perhaps with 'Wuthering Heights' presenting a sense of realism in respect to the theme of love and 'Jane Eyre' a more, unconventional, idealised 'fantasy' of love. ...read more.

Mr Rochester is a forceful, passionate and independent character; he is determined to have Jane, either as his wife or mistress, whatever the cost. However, he is not portrayed as selfish; a characteristic evident in both Catherine and Heathcliff. "The ease of his manner freed me from painful restraint; the friendly frankness, as correct as cordial, with which he treated me, drew me to him", Jane narrates in chapter fifteen. Mr Rochester often refers to Jane as a bird, fairy or sprite, "When you came on me in Hay Lane last night, I thought unaccountably of fairytales." The language used here is heightened and passionate and references to fairies and sprites may echo Shakespeare's, 'A Mid Summer Nights Dream'. The references to Jane and magical creatures may be symbolic of the great influence Jane has over him, "You master me," he tells Jane in Chapter 24. Throughout the novel Mr Rochester 'toys' with Jane in the hope of making her jealous, but he eventually learns that he must depend on respect and see her as an individual, "I am no bird; I am a free human being with an independent will." Through these two characters the development of mutual respect is shown. Mr Rochester is simply fascinated by Jane's courage, education, remarkable efficiency and sterling character. And she is not a romantic who is blind to the defects of her lover, as Jane states in chapter seventeen, "Most true is it that 'beauty is in the eye of the gazer.' ...read more.

However, although they were paid employees, they were more or less treated as servants; thus Jane was penniless and powerless while at Thornfield. Jane's understanding of the social barrier becomes evident when she becomes aware of her feelings for Rochester; she is his intellectual, but not his social equal. Even before the crisis surrounding Bertha Mason, Jane is hesitant to marry Rochester because she senses that she would feel indebted to him for "condescending" to marry her. Jane's distress, which appears most strongly in Chapter 17, seems to represent Charlotte Bronte's view of Victorian class attitudes. The social etiquette in 'Wuthering Heights' is not as strictly apparent as it is in 'Jane Eyre', at the beginning of the novel but still maintains a very strong presence. However we do see that the Linton's play the role of the upper class citizens and so Thrushcross Grange also seems to adapt the Linton family's civility, culture and refinement. Its residents such as, Mr Lockwood, always seem to be the social superiors of those residing in Wuthering Heights. Both authors invite the reader into an alluring world of intrigue, passion, conflict, frustration and love, in all forms. 'Jane Eyre' portrays an idealised picture of true, enduring romantic love, ending in a typical 'fairytale' fashion, however in 'Wuthering Heights', the reader is plunged into a dramatic, passionate love affair between Heathcliff and Catherine against a backdrop of seemingly impossible love. Emily Bronte's use of symbolic representation of the elements of nature is similar to the love that Catherine and Heathcliff share. The reader is compelled to hope that against all odds, in both novels, that love conquers all. Word Count: 2672 ?? ?? ?? ?? 1 ...read more.