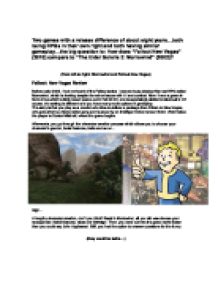 Two games with a release difference of about eight years...both being RPGs in their own right and both having similar gameplay...the big question is: How does "Fallout New Vegas" (2010) compare to "The Elder Scrolls 3: Morrowind" (2002)? (from left to right: Morrowind and Fallout New Vegas) Fallout: New Vegas Review Before early 2009, I had not heard of the Fallout series. I was too busy playing this neat RPG called Morrowind, which is riveting despite the minor issues with AI and combat. Now I have a game in front of me which is fairly recent (came out in Fall 2010), and is surprisingly similar to Morrowind. Of course, the setting is different and you have many more options in gameplay. The story is that you play as a courier who tries to deliver a package from Primm to New Vegas, who gets shot by a fierce raider gang and is saved by an intelligent robot named Victor. Victor takes the player to Doctor Mitchell, where the game begins. ...read more.

For example, you can choose the Rapid Reload perk which allows you to reload your weapons 25% faster than the normal rate. Cool, huh? After leveling up, I decided to spend about half of my allotted time to go and kill some mutant ants. I loved testing the combat system, especially with the VATS. Basically, if you have enough so-called Action Points, you can choose to shoot any part of the body of your victim. Then, prepare to watch as litres of blood come oozing out of their bodies in full HD! Or otherwise...you can make a nice cuppa instant coffee with extra foam. Mmm... Morrowind was pretty simples when it came to combat. All you did was use your sword, dagger, hammer, club, spear, spell, staff, shortsword...etc... to pummel your enemies. Finally, both games have quests. You can choose either to agree to help people or not. Sometimes you are kinda forced into completing the quest if the quest-giver offers you an enchanted sword or a nice gun prior to completion. ...read more.

Although, it is implied that I do not really like the Fallout game, my opinion changes when describing the "VATS" combat system, I use a lot of emotive language and show my utter amazement to the feature, for example the transitive verb "oozing". I use the colloquial noun "cuppa" instead of "cup of" because it adds humor to the article and also, to create consonance and rhythm between the concrete nouns "cuppa" and "coffee". I used the adjective "simples" instead of "simple" as it makes a reference to popular culture. It also adds to the sibilance of the list of weapons which Morrowind has. I added an image below the list to illustrate my point on the variety of weapons which Morrowind had. Finally, I include the list of sources where I have acquired my images. It uses the standard layout and grammar in a sources list until when I say "Words - from my own brain :P". This is used for humor and the :P emoticon emphasises that I am in tune with colloquial language and modern ways of conversing in an electronic mode text. This contrasts with the headline which looks and reads professionally. ...read more.