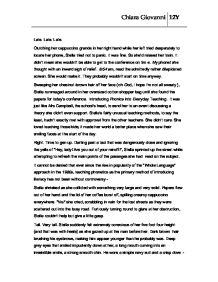 Late. Late. Late. Clutching her cappuccino grande in her right hand while her left tried desperately to locate her phone, Stella tried not to panic. It was fine. So she'd missed her train. It didn't mean she wouldn't be able to get to the conference on time. My phone! she thought with an inward sigh of relief. 8:54 am, read the admittedly rather dilapidated screen. She would make it. They probably wouldn't start on time anyway. Sweeping her chestnut-brown hair off her face (oh God, I hope I'm not all sweaty), Stella rummaged around in her oversized cotton shopper bag until she found the papers for today's conference. Introducing Phonics into Everyday Teaching. It was just like Mrs Campbell, the school's head, to send her to an event discussing a theory she didn't even support. Stella's fairly unusual teaching methods, to say the least, hadn't exactly met with approval from the other teachers. She didn't care. ...read more.

Doesn't he care?! "Erm- excuse me," she began haughtily, sounding more confident than she felt. "Don't you look where you're going? I'm going to be late, you made me spill my coffee, and now I've lost my papers! And you haven't even apologised!" His smile twitched. "I am sorry, miss," he said, and Stella could hear the traces of an Irish lilt to his voice. "However, are you sure you're alright? If I were you, I would be more concerned about whether my caffeine-laden beverage has scarred my skin, rather than whether my accidental assailant has apologised or not." The creasing at the corners of the man's eyes revealed he wasn't taking her seriously, which only served to infuriate Stella further. "Don't call me 'miss', thank you very much," she retorted, and saw the smile slide off his face. "I am perfectly fine, aside from the fact I could quite possibly lose my job for missing this conference, and you've just ruined an �80 dress, as well as my shoes." ...read more.

Stella is not asking the hero to excuse her; she is aiming a rebuke at him: similarly, the hero is not offering a sincere apology but is mocking Stella's haughty manner. The heroine also seems more realistic when her authoritative persona as a teacher comes through when she uses the imperative to a grown man. Two very short sentences, "Tall. Very tall." halt the pace of the narration in contrast to the preceding four long sentences. The finite verb and preposition "gazed up" implies adoration and devotion in an almost religious sense. Pre-modifying adjectives pair with the lexis of anatomy, resulting in a triad such as "Deep grey eyes" or "strong smooth chin" which paints a traditional picture of a romantic hero. An authentic voice is created for the male character as his idiolect is more descriptive than Stella's, demonstrated through the deliberate alliteration of "scarred my skin" and "accidental assailant". The overly descriptive vernacular also adds humour and reality to the interaction between the characters. ?? ?? ?? ?? Chiara Giovanni 12Y ...read more.