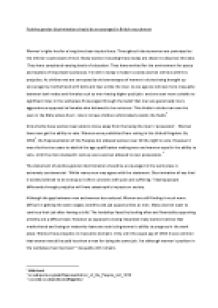 Composition - Positive gender discrimination should be encouraged in British recruitment

﻿Positive gender discrimination should be encouraged in British recruitment Women?s rights has for a long time been topical issue. Throughout history women are portrayed as the inferior counterpart of men. Many women including those today are shown to disprove this idea .They have completed varying levels of education. They have worked for the environment for peace and leaders of important businesses. Yet still in today?s modern society women still live with this prejudice. As children we are corrupted by old stereotypes of women?s duties being brought up encourage by motherhood with dolls and toys unlike the man. As we age we witness more inequality between both males and females such as men having higher paid jobs and are seen more suitable to significant roles in the workplace Encouraged through the belief that men are genetically more aggressive as opposed to females who believed to be nurturers. This divide in duties can even be seen in the Bible where Eve?s role is to have children whilst Adams works the fields.[1] Only shortly have women been able to move away from the being the man?s ?possession?. ...read more.

Women face prejudice in masculine domains. Only until the equal pay of 1963 it was common that women would be paid less than a man for doing the same job. Yet although women?s position in the workplace has improved ? inequality still remains. Secondly there is the importance of parenthood. Parenting is important in order for a healthy development of a child. Many believe that children are more likely to better develop with both a male and female role model. Yet gender inequality is encouraging young women to have little ambitions for work. Ambition is an important quality all should be proud to hold. Yet encouraging discrimination will increase unemployment issues and lead to lower quality of life for many. In enforcing this plan many young women may revoke to crime in order to sustain income crucial to finance a family. Additionally there is no scientific evidence to prove that women are more inferior to men when it comes to the work place. All jobs require diversity within their employees in order to be successful. ...read more.

This was a turning point in the civil rights movement and in doing so showed commitment and bravery. Many women today and in years past all showed leadership, power, and ability to speak out-All of which a key for a successful business. However some people do agree with the statement believing in the conventional idea that women do not believe that women being in high-power positions, due to the belief they are not aggressive enough. Some even believe the women?s role is staying home looking after the children.it is rare to see women who earn more than the man within a relationship. This view is particularly common in less developed countries as jobs tend to be labour based. Making it increasingly difficult from women to have a job. In conclusion I believe although inequality of women of women has greatly improved. There are still areas particularly within work where women are still stereotyped .Some scientist analysed data from work place surveys taken predominantly in the U.S but also Canada. Europe and East Asia. They found that employee?s reactions to women leaders reflect Gender stereotypes. I believe we today should not judge those on their race, genders or background. Yet their ability and achievements. ...read more.