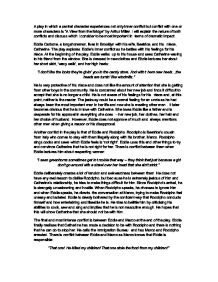 Conflict in 'A View from the Bridge'

A play in which a central character experiences not only inner conflict but conflict with one or more characters is "A View from the Bridge" by Arthur Miller. I will explain the nature of both conflicts and discuss which I consider to be most important in terms of dramatic impact. Eddie Carbone, a longshoreman, lives in Brooklyn with his wife, Beatrice, and his niece, Catherine. The play explores Eddie's inner conflict as he battles with his feelings for his niece. At the beginning of the play, Eddie walks up to his house and sees Catherine waving to his friend from the window. She is dressed in new clothes and Eddie lectures her about her short skirt, 'wavy walk', and her high heels: "I don't like the looks they're givin' you in the candy store. ...read more.

Another conflict in the play is that of Eddie and Rodolpho. Rodolpho is Beatrice's cousin from Italy who comes to stay with them illegally along with his brother, Marco. Rodolpho sings cooks and sews which Eddie feels is 'not right'. Eddie uses this and other things to try and convince Catherine that he is not right for her. There is conflict between them when Eddie lectures him about respecting women: "I seen greenhorns sometimes get in trouble that way - they think that just because a girl don't go around with a shawl over her head that she ain't strict." Eddie deliberately creates a lot of tension and awkwardness between them. He does not have any real reason to dislike Rodolpho, but because he is extremely jealous of him and Catherine's relationship, he tries to make things difficult for him. ...read more.

He killed my children! That one stole the food from my children!" Eddie's actions would cause him to be isolated from the whole community. He lives in a community which helps illegal immigrants and was aware that he would be turned against but his attempts to protect Catherine had gone too far. He loses the respect of his community, family and friends and cares more about this than Marco's starving children. His lack of remorse shows is selfish personality. A fight starts between Marco and Eddie and Eddie is killed with his own knife. The most important conflict in the play is Eddie's inner conflict. He found it easier to fault Rodolpho and cause conflict than to admit his own shameful feelings for his niece. His elfish behaviour caused many unnecessary conflicts throughout the play and ultimately lead to his death. If he had managed to solve his conflicts with himself, he would have saved his own life and saved much hurt for his family. ...read more.