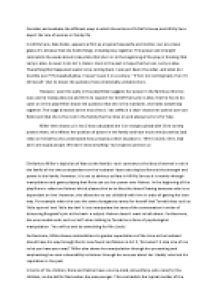 Consider and evaluate the different ways in which the writers of A Doll's House and All My Sons depict the role of women in family life.

﻿Consider and evaluate the different ways in which the writers of A Doll's House and All My Sons depict the role of women in family life. In All My Sons, Kate Keller, appears at first as a typical housewife and mother, but at a closer glance it?s obvious that she holds things, including Joe, together. This power and strength contradicts the weak almost crazy state that she?s in at the beginning of the play in thinking that Larry is alive. As seen in An Act 1, Kate is stuck in the past in hope that her son, Larry is alive. ?Everything that happened seems to be coming back. I was just down the cellar, and what do I stumble over? His baseball glove. I haven?t seen it in a century.? ?If he?s not coming back, then I?ll kill myself.? (Act 1) shows the audience how emotionally unstable she is. However, even this early in the play Miller suggests her power in the family as this line was used to manipulate Joe and Chris to support her belief that Larry is alive, that he has to be. ...read more.

?You will try and do something for Mrs Linde.? Furthermore, Miller shows contradictions to gender expectations of the time as the husband should have his way through Nora?s new found confidence in Act 2, ?But wasn?t it also nice of me to let you have your way?? Miller also shows her manipulation through her presenting and emphasising her own vulnerability to Helmer through her excuses about her ?daddy? who lost his reputation in the past. In terms of the children, Nora and Helmer have a nurse-maid, Anne-Marie, who cares for the children, as she did for Nora when she was younger. This contradicts the typical mother of the time as they would be the child-bearer but due to Helmer?s growing reputation and position at the bank they can afford these luxuries. However, when the children are brought home Nora does interact and play with them. The repeated use of exclamatives when she speaks to the children, such as ?How fresh and bright you look!?, shows her excitement at seeing them and also reflects that she doesn?t spend a lot of time with them. ...read more.

Similarly, Ibsen also creates a character who isn?t conforming to society?s expectations of her as a woman, Mrs Linde. She is a widow after having felt forced to marry in order of supporting her ?bedridden and helpless? mother as well as her two younger brothers. On top of being unmarried, she didn?t have children with her late husband, and thus doesn?t conform to the expectations of being a mother or a wife. Miller shows that she wants to be in love, married and raise children through her remembered love for Krogstad. The vocative ?Nils? she uses for him allows the audience to see that she is personal with him, more-so than anyone else in the play. ?I need someone to mother, and your children need a mother. We two need each other.? In this line in Act 3 Miller shows that she wants bring happiness to a home. The extended metaphor of being ?castaways? on a ?wreck? and ?clinging to the wreck? of their lives is used by Miller in her voice to create compatibility between them as she knows that marrying Krogstad and helping him to raise his children would fulfill her gender role of the time as well as putting an end to both her own and his loneliness. ...read more.