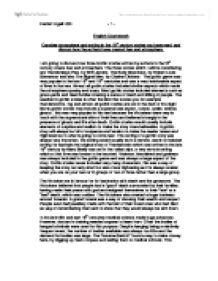 Consider atmosphere and setting in the 19th century stories you have read, and discuss how the authors have created fear and atmosphere.

English Coursework Consider atmosphere and setting in the 19th century stories you have read, and discuss how the authors have created fear and atmosphere. I am going to discuss how three Gothic stories written by authors in the19th century create fear and atmosphere. The three stories which I will be considering are The Monkeys Paw, by WW Jacobs, The Body Snatchers, by Robert Louis Stevenson and also The Signal Man, by Charles Dickens. The gothic genre was very popular in the late 18th and 19th centuries and was a very fashionable aspect of lives in that era. Almost all gothic stories included similar aspects which made the atmosphere spooky and scary. Most gothic stories included elements such as grave yards and dead bodies creating a sense of death and killing of people. The weather in gothic stories is often the kind that scares you for example thunderstorms, fog and almost all gothic stories are set in the dark of the night. Some gothic stories may include a supernatural aspect, curses, spells, wishes, ghosts , this was very popular in this era because the Victorians were very in touch with the supernatural side of their lives and believed strongly in the presence of ghosts and life after death. Gothic stories would usually include elements of surprise and realism to make the story more believable. A gothic story will always be full of suspense and tension to make the reader tenser and frightened as to what is going to come next. The setting of a gothic story was always very important, the setting would usually be in a remote, exotic or isolated setting for example the original story of Frankenstein which was written in the late 18th century by Mary Shelly was set in the Italian alps, a very remote setting which at that time was known to be haunted. Violence, bloodshed and goriness was always included in the gothic genre and was always a large aspect of the story. ...read more.

Fettes also turns out to be less wicked than Macfarlane, which is unexpected, when he begins to feel guilty about people being killed for their bodies, he finds himself feeling regretful and scared. He also shows horrified and panic feelings when he sees the corpse of some one he knew, this shows to us that he does have feeling and can show his emotions and express them, he seems to be more respectable person than we first imagined when the narrator begins to make us feel sorry for him, the narrator does this by talking about how fettes didn't realise what he was doing and what was happening and when he did find out, he was horrified and shocked. He also becomes offended when Wolfe offers him money this emphasised the fact that he's a very proud person and doesn't like to be pity and also the fact of how much he disliked Wolfe. We as the readers learn to trust fettes because he doesn't seem like a particularly bad person and he reacts t o events that happen in the way that we'd expect a good trustworthy person to react. The undertaker in the story is a mysterious character as not much is told about him and he isn't talked about much, only in the beginning. He shows emotion (shock) when he hears that Fettes knows the doctor "do you know him doctor" asked the undertaker with a gasp." we know here that the undertaker is shocked and slightly taken back because it says that the undertaker gasped, showing that he was shocked to hear this and wanted to find out how and why fettes knew this man. We cannot completely trust the undertaker as we don't know anything about him; he could be anyone with any background, good or bad. Macfarlane is also a particularly mysterious character a snot much is said about him at the start and not much is said about his past, for this reason he also seems Un- ...read more.

This could be seen as more frightening than the body snatchers because supernatural beings were know as being evil, the devil or for having powers which could not be defeated by any human being. The Victorian period was known for having a deep interest supernaturalism which makes the story more realistic to people of that time. Suspense is create well in the story because we as the audience know that the "being" is going to appear three times but the narrator doesn't so the audience are sat waiting for it to happen while the characters ponder on what is going on, it creates a lot of tension on the audiences behalf and also creates fear. I preferred reading the story of The Body Snatchers because I thought it was a lot more realistic and I could relate it directly to something that happened in history, Berk and Hare, I also thought that it was easy to understand and didn't leave so many unanswered questions like The Signal Man did, I like a story that has a direct, understandable finish, in the signal man you don't actually find out who or what it was that was calling the signal man because eventually the signal man is killed of and the story is left unanswered, I think it Is much more effective to finish a story with no lose ends because then the reader can be satisfied that a conclusion has been reached. The body snatchers was also a more thrilling read and I think that it created fear more successfully than The signal man this could have been because it was set in different places which were isolated and remote and was also set at night when it was dark, the weather was bad whereas in the signal it was set in the day still in a remote place but no reference to the weather was made. Overall I thought that The Body Snatchers had a better and more interesting storyline which one could relate to more easily. ?? ?? ?? ?? Harriett Ingall L5N - 1 - ...read more.