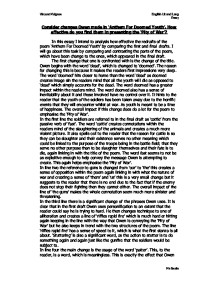 Consider changes Owen made in 'Anthem For Doomed Youth'. How effective do you find them in presenting the 'Pity of War'?

Consider changes Owen made in 'Anthem For Doomed Youth'. How effective do you find them in presenting the 'Pity of War'? In this essay I intend to analysis how effective the redrafts of the poem 'Anthem For Doomed Youth' by comparing the first and final drafts. I will go about this task by comparing and contrasting the parts of the poem, which have been change to the ones, which appeared in the final draft. The first change that one is confronted with is the change of the title. Owen begins with the word 'dead', which is changed to 'doomed'. The reason for changing this is because it makes the readers first impressions very deep. The word 'doomed' hits closer to home than the word 'dead' as doomed creates image sin the readers mind that all the youth will die as opposed to 'dead' which simply accounts for the dead. The word doomed has a greater impact within the readers mind. The word doomed also has a sense of inevitability about it and those involved have no control over it. It hints to the reader that the youth of the soldiers has been taken away due to the horrific events that they will encounter whilst at war. ...read more.

In line five there is the usage of the words 'no mockery from prayers or bells'. The true meaning of this is that the troops see the praying of those is a mockery, as it seems to solve no problems or bring the war to an end. This may be because they are angry that they are the ones who have to be fighting and exposed to the horrific scenes of warfare and those who are out here fighting seem to be taking the easy way out. The original line takes the same idea of people praying but tells it to the reader that there it is not present to the soldiers. The redraft is much more useful within the poem as the original comments on a scenario but the redraft comments on what the soldiers are feeling and therefore highlights the 'Pity of War'. Lines six and seven are interlinked. Owen personifies the act of firing a missile. In the first Owen implies that praying and hymn singing helps no one in the trenches in the second he seems to merge the idea together; that the bullets can be compared to a choir as they are constant and can be heard a making a single verse and again they cannot be stopped by the act of singing. ...read more.

But it is also a metaphor in itself the fact that the blinds are pulled down because of darkness just in the same way the fighting is stopped because of the lack of light. Overall the last line shows how pitiful war is. The way that it seems to just be a way of life. If it actually was important then troops would make an effort but it seems to make war be a petty thing and as soon as darkness strikes everyone puts down guns and waits until morning. Overall the majority of the changes are to make the lines have more impact but some are also to be in with the structure. The poem is in two stanzas, the first seems to create a picture of the entire events of a whole war. Due to the way it talks of battle and then mention remembrance at the end. Due to the language used and the usage of alliteration the stanza seems to have a sense of speed about it and overall creates a very compelling picture of war. The second stanza has a much more religious and emotional view about it. The pace is slowed down and there is much emphasis on the connotations and imagery, which the author crates. The poem is a very true reflection of the way in which life was wasted in World War One. Vincent Mulgrew English Lit and Lang Essay Ms Swain ...read more.