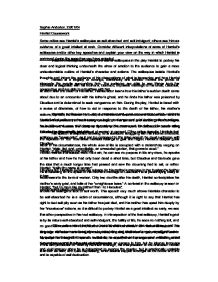 Consider different interpretations of some of Hamlet's soliloquies and/or other key speeches and explain your view on the way in which Hamlet is portrayed during the speeches you have selected.

Sophie Anderton, 22/01/04 Hamlet Coursework Some critics see Hamlet's soliloquies as self-absorbed and self-indulgent; others see him as evidence of a great intellect at work. Consider different interpretations of some of Hamlet's soliloquies and/or other key speeches and explain your view on the way in which Hamlet is portrayed during the speeches you have selected. William Shakespeare employs the use of soliloquies in the play Hamlet to portray his clear and logical thinking underneath the show of emotion to the audience to gain a more understandable outline of Hamlet's character and actions. The soliloquies isolate Hamlet's thoughts and inform the audience of his observations of what is happening and how Hamlet interprets the events surrounding him. The audience are able to see things from his perspective and are able to empathise with him. Hamlet is a tragedy of revenge, dishonesty and conflict. Hamlet the prince of Denmark is disgusted with his mother's, Gertrude, impulsive marriage to his uncle, Claudius, so soon after the death of his father. Hamlet soon learns how his father's sudden death came about due to an encounter with his father's ghost, and he finds his father was poisoned by Claudius and is determined to seek vengeance on him. During the play, Hamlet is faced with a series of dilemmas, of how to act in response to the death of ...read more.

The speech is an all-embracing view of the hollowness of life. His intellectual analysis is getting in the way of his actions; he talks about on others his anti disposition has had. His speech shows his intellectual views and his imagination and the depth of his despair, as it is the first time we get to see Hamlet feigning madness, due to his behaviour known as antic disposition is it possible for the audience to lose sight of his true state. The soliloquy is almost written in entire blank verse; Shakespeare uses punctuation to heighten the closing effect. In this soliloquy we can see Hamlets self-hatred clearly, this can be linked to the first player moving himself to tears when reciting a speech. Hamlet describes the actor; the fact that the story is taken from "antiquity" emphasises the distance between the actor and the cause of emotion, and compares himself to him as why he cannot be the same. G Wilson Knight states "Hamlet feels inferior, not to the artist but to man who feels too passionately." We can see here in this speech how Hamlet can be seen as a great intellect at work, as we are clearly shown his immense circumstances and are able to empathise with him as such problems, could drive him to the point of suicide, but he sees past this, and sees it would not be fulfilling his destiny. ...read more.

is presented with the genre "action", the word action is an inventive idea of what the soliloquy is trying to convey and what Hamlet must do. This interpretation gives us an insight into what the director interpreted from the play. I found this portrayal to be more inventive and intriguing as it conjured up different meanings to the speech, and also the view to look at it from another perspective, as surely Shakespeare wanted his audience to consider the choices and how Hamlet delivered his lines. In conclusion to the question to whether Hamlet is self-absorbed or a great intellect, it is my view that as a reader, this play is about Predestination, although Hamlet displays great moments of clarity, logic and instants of great intellect, my overall view after studying and interpreting the text is that he is a victim of circumstance, he is angst ridden, a mind too strong for his situation and was forced to be aggressive out of his strict morals and beliefs. He is caught up in a network where his split character makes the person he is, he is driven by his feelings of anger, torment and self-worthiness which have clouded his judgement and made him more tangible, and I am left with the view that Hamlet appears more self indulgent as a whole than a great intellect. ...read more.