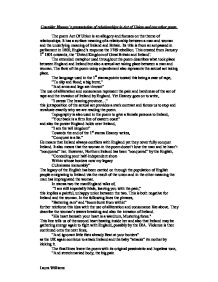 The poem Act Of Union is an allegory and focuses on the theme of relationships. It has a surface meaning of a relationship between a man and woman and the underlying meaning of Ireland and Britain. Its title is from an act passed in parliament in 1800, England’s response the 1789 rebellion. This created from January 1st 1801 onwards, the ‘United Kingdom of Great Britain and Ireland’.

The language used in the 1st stanza points toward this being a case of rape,

“And arms and legs are thrown”

The use of alliteration and consonance represent the pain and harshness of the act of rape and the invasion of Ireland by England. Yet Heaney goes on to write,

“I caress The heaving province…”

this juxtaposition of the sexual act provides a stark contrast and forces us to stop and revaluate exactly why we are reading the poem.

Topography is also used in the poem to give a female persona to Ireland,

“Your back is a firm line of eastern coast”

and also the power England holds over Ireland,

“I am the tall kingdom”

Towards the end of the 1st stanza Heaney writes,

“Conquest is a lie.”

He means that Ireland always conflicts with England yet they never fully conquer Ireland. It also means that the woman in the poem doesn’t love the man and he hasn’t “conquered” her. However, Northern Ireland has been “conquered” by the English,

Within whose borders now my legacy

The legacy of the English has been carried on through the population of English people emigrating to Ireland via the result of the union and in the other meaning the man has impregnated the woman.

In stanza two the man/England talks of,

“I am still imperially Male, leaving you with the pain,”

this implies a painful, unhappy union between the two. This is both negative for Ireland and the woman. In the following lines the phrases,

"Battering ram" and "boom burst from within”

further reinforce this idea with the use of alliteration and consonance like above. They describe the woman’s waters breaking and also the invasion of Ireland.

"His heart beneath your heart is a wardrum, Mustering force."

This line tells us of the second heart beating inside her and also that Ireland may be gathering energy again to fight with England, possibly by the IRA. Violence is then continued onto the next lines,

“And ignorant little fists already Beat at your borders”

as the UK again continue to attack Ireland and the baby “attacks” its mother by kicking it.

The final lines leave the poem with its original pessimistic and hopeless tone,

“And stretchmarked body, the big pain

This describes how the mother is left after the birth, scarred for life, in pain etc, exactly like Ireland. The word ‘again’ reiterates that this is always happening to Ireland by England.

The poem Bone Dreams is a contrast to Act Of Union. The poem is about the love of England and its language comparing it with bone and the land.

The 1st stanza uses ellipsis to represent the lack of language used in Anglo Saxon times. The sentences are not complete.

not only describe the language but the bone which is,

“yellowing, ribbed impression in the grass”

the bone is detailed, like language itself there are the marks in the grass describe writing.

Language is then later on described as a ‘nugget’ which suggests language is like gold, and it also appeals to the reader’s senses.

Heaney then introduces the relationship between England and Ireland into the poem comparing it to David and Goliath,

“the sling of mind to pitch it at England”

this is to compare it to the story of the giant being overcome my David, perhaps like England being defeated to Ireland.

In stanza four Heaney personifies England as a woman,

He then puts himself into the poem and uses topography to describe her features and also describe England and that of chalk pictures seen in the English countryside,

“ossify myself by gazing: I am screes on her escarpments... carved upon her downs, soon my hands on the sunken fosse of her spine”

he uses sexual imagery here to personalise the poem, perhaps to seem closer or “in love” with this woman as the English language. He continues to personify England throughout the fifth stanza,

“…cradling each other between the lips of an earthwork.”

“…of the elbows, the vallum of her brow and the long wicket of collarbone,”

In the final stanza of the poem he discovers England is not as intimidating as he thought, he personifies England again as a mole,

“I had thought the mole a big-boned coulter but there it was small and cold...”

he uses hyphenated and pre/post modifiers here to say how he feels about England now, the use of alliteration all emphasises this.