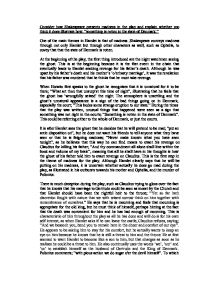 Consider how Shakespeare presents madness in the play and explain whether you think it does illustrate how, &quot;something is rotten in the state of Denmark.&quot;

Consider how Shakespeare presents madness in the play and explain whether you think it does illustrate how, "something is rotten in the state of Denmark." One of the main themes in Hamlet is that of madness. Shakespeare conveys madness through not only Hamlet but through other characters as well, such as Ophelia, to covey that that the state of Denmark is rotten. At the beginning of the play, the first thing introduced are the night watchmen seeing the ghost. This is at the beginning because it is the first event in the chain that eventually leads to Hamlet seeking revenge for his father's death. Although he was upset by his father's death and his mother's 'o'erhasty marriage', it was the revelation that his father was murdered that he thinks that he must take revenge. When Horatio first speaks to the ghost he recognises that it is unnatural for it to be there; "What art thou that unsurp'st this time of night", illustrating that he feels that the ghost has 'wrongfully seized' the night. The atmosphere is unsettling and the ghost's unnatural appearance is a sign of the bad things going on in Denmark, especially the court; "This bodes some strange eruption to our state." During the times that the play was written, unusual things that happened were seen as a sign that something was not right in the courts; "Something is rotten in the state of Denmark". ...read more.

It could also be that she is recalling how Hamlet is now lost to her, and she is still looking for her true love, because it seems obvious that she has not found him yet. However, the rest of the songs seem to be about Hamlet, as they are about lost love and some of them imply that Ophelia had been s******y intimate with Hamlet; "Quoth she, before you tumbled me you promised me to wed". It seems that both her father and Hamlet are responsible for Ophelia's madness, and this is reiterated by what Ophelia sings about. Ophelia was controlled all the men in her life, and this was customary for the time, but it seems that they took too much of a hold on her, with none of them considering her feelings, for her father told her to no longer speak to Hamlet as it could affect his career, Laertes also told her to stay away from Hamlet and Hamlet was cruel to her. She also says, after her first song; "They say the owl was a baker's daughter." This could just be nonsense, but it could also be referring to her father, saying that once she was the daughter of a man in the court, but now she is just the daughter of a dead old man. Polonius did help the corruption in Denmark, such as spying and trying to make sure his own career was safe, and because of him Ophelia is mad. ...read more.

However, there still is some of the old Hamlet left in him, for after Ophelia has died he says that he always did love her, so perhaps he shunned her so that he would have a clear mind to be able to think about his revenge. Also he apologised to Laertes before they fight, perhaps seeing something of himself in him, for his father was murdered as was Hamlet's. This shows that Hamlet has not yet completely given way to the corruption of Denmark. Just before Hamlet dies, he claims that the throne should be given to Fortinbras. Hamlet admired Fortinbras for his action, and he was quite like Hamlet, his father being killed and he being usurped from the throne. Fortinbras accepts the throne and orders that Hamlet's body be treated with respect; "Let four captains, bear Hamlet like a soldier to the stage, for he was likely, had he been put on, to have proved most royal". Fortinbras believes that Hamlet would have been a good king, and perhaps he might have had he have not been corrupted by the state of Denmark. Fortinbras survived, seemingly because he came from outside Denmark, and as did Horatio, not only because he was a good friend to Hamlet, but as Hamlet said; "There are more things in heaven and earth, Horatio, than are dreamt of in your philosophy." Hamlet believed that Horatio was unable to see the corruption that infected Denmark, and because of this he was untainted by it, this perhaps being a reason why Horatio does not die in the play. ...read more.