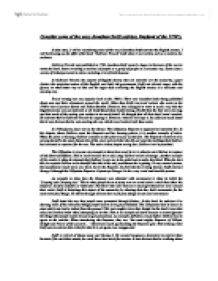 Consider some of the ways Jonathan Swift satirises England of the 1720's.

Consider some of the ways Jonathan Swift satirises England of the 1720's. In this essay, I will be considering some of the ways Jonathan Swift satirises the English society. I will be focusing on the effect of his book 'Gullivers Travels' both when it was written and on a modern day audience. Gullivers Travels was published in 1726. Jonathan Swift caused a huge riot because of the way he wrote the book. Satire is making a mockery of people or a group of people in a sarcastic way. Satire uses a variety of techniques used in satire, including a lot of toilet humour. In Gullivers Travels, the aspects of English Society that are satirised are the monarchy, upper classes, the suspicious nature of the English, and lastly the government. Swift was already angry with the Queen, so what better way to take out his anger than criticising the English society in a sarcastic and amusing way. Travel wirintg was very popular back in the 1700's. There was countless books being published about men and their adventures around the world. ...read more.

To any normal person, this punishment would seem very hard, but to the Emperor, he feels that he is being lenient. Swift satirises George I through the Lillipution Emperor. It portrays George I to be a very cruel and horrible person. An example to show how the Emperor was obsessed with ceremonies is when he holds the "Leaping and Creeping day" This is when people have to jump over or crawl under a stick that either the Emperor, his first minister or both hold. The three who were best at it would get threads to wear around their waist. Swift is Satirising this aspect of the monarchy by showing that they hold ceremonies for the most ridiculous things. He shows through sarcasm how such petty things do not need ceremonies. Swift hated the way that people were promoted through flattery. In the book, he satirises it by showing some of the ridiculous things people had to do to get promotions. The Lilliputions had to dance on rope which was twelve inches from the ground. ...read more.

Swift satirises long pompous speeches. An example of this is when the emperor of Lilliput talks for two hours long. By the end of the talk, nobody has any idea at all about what the emperor was talking about. "His imperial majesty spoke often to me, and I returned answers, but neither of us could understand a syllable. After about two hours the court retired ..." This quote tells the reader that Gulliver thought that the emperor was ranting on about nothing at all for two hours. This is satirical because he says how people with high authority are allowed to talk about absolutely nothing, and how nobody does anything about it had doesn't ask for them to explain. At the time when Jonathan Swift was writing Gulliver's Travels, England had been involved in war with which lasted from 1702-1713. This war was known as The War of The Spanish Succession. It was also known as Queen Anne's war. The trigger of the war was when King Louis XIV wan to put his grandson on the English throne when the Spanish king died. Spain took this as an insult and the English didn't want this France already had a big population compared to England. ...read more.