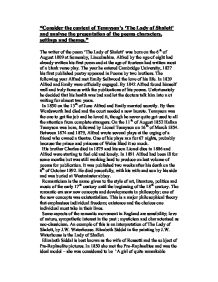 &quot;Consider the context of Tennyson's 'The Lady of Shalott' and analyse the presentation of the poems characters, settings and themes.&quot;

"Consider the context of Tennyson's 'The Lady of Shalott' and analyse the presentation of the poems characters, settings and themes." The writer of the poem 'The Lady of Shalott' was born on the 6th of August 1809 at Somersby, Lincolnshire. Alfred by the age of eight had already written his first poem and at the age of fourteen had written most of a blank verse play. The year he entered Cambridge University, 1827 his first published poetry appeared in Poems by two brothers. The following year Alfred met Emily Sellwood the love of his life. In 1839 Alfred and Emily were officially engaged. By 1842 Alfred found himself well and truly famous with the publications of his poems. Unfortunately he decided that his health was bad and let the doctors talk him into not writing for almost two years. In 1850 on the 13th of June Alfred and Emily married secretly. By then Wordsworth had died and the court needed a new laurete. Tennyson was the one to get the job and he loved it, though he never quite got used to all the attention from complete strangers. On the 11th of August 1852 Hallan Tennyson was born, followed by Lionel Tennyson on 16th of March 1854. Between 1874 and 1879, Alfred wrote several plays at the urging of a friend who owned a theatre. One of his plays ran for 67 nights, probably because the prince and princess of Wales liked it so much. ...read more.

From this extract of the poem the reader also gets the impression of imprisonment because the tower that the Lady of Shalott is in is like a prison, which she is trapped in. "Enigmatic" would be a good word to describe the Lady of Shalott's character because she is mysterious and she is hidden away. One of the techniques used by Tennyson to give the reader a sense of mystery are the questions used as a rhetorical device "But who hath seen her wave her hand? Or at the casement seen her stand?" By using these questions Tennyson manages to create interest and a sense of mystery. In the following stanza (stanza 4) Tennyson continues to make the reader aware of the theme of mystery "Listening, whispers " 'Tis the fairy The Lady of Shalott" " The mention of whispers in this quote implies that something is being hidden and this quote is also another example showing the Lady of Shalott's mysterious character because the people around her think she is magical and she is so quiet that they think she is unreal which is why she is referred to as a "fairy". After setting the scene in part one, part two goes on to mention the curse which the Lady of Shalott has on her, which only allows her to look at things outside through her mirror at a distance and if she were to look directly out of her window to Camelot then she would break the curse. ...read more.

In the next stanza there is again a sense of pathos "Like some bold seer in a trance Seeing all his own mischance" Here Tennyson describes the gradual deterioration of her actions making the reader realise that at this point she is moribund. In the very last stanza of the poem the Lady of Shalott is finally given the status she deserves "And in the lighted place near Died the sound of the royal cheer" She is stopping the royal cheer because they are so interested in her and she has finally had an impact on the place she had been longing to go to. Another way in which the Lady of Shalott id finally given the status she deserves is when Lancelot finally notices her and says "She has a lovely face; God in her mercy lend her grace, The lady of Shalott" This is an ironic ending because the Lady of Shalott has loved Lancelot most of her life and he has only just noticed her and he would have probably loved her too but now she is dead. Something very distinctive about Tennyson's poetic structure is the sharp separation he achieves between the sections in the poem. Instead of telling the story in a straightforward form he prefers to progress through a series of emotions, visions and actions. 'The Lady of Shalott' is a very mysterious poem because you never actually find out how or why she was cursed or who cursed her. The ending is also unexpected because you would expect it to lead to a happy ending and that the Lady of Shalott would be freed from the curse. ...read more.