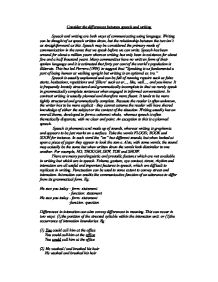 Consider the differences between speech and writing.

Consider the differences between speech and writing Speech and writing are both ways of communicating using language. Writing can be thought of as speech written down, but the relationship between the two isn't as straightforward as this. Speech may be considered the primary mode of communication in the sense that we speak before we can write. Speech has been around for about a million years whereas writing has only been in existence for about five and a half thousand years. Many communities have no written form of their spoken language and it is estimated that forty per cent of the world's population is illiterate. This has led Perrera (1984) to suggest that "Speaking is as fundamental a part of being human as walking upright but writing is an optional extra." Speech is usually unplanned and can be full of running repairs such as false starts, hesitations, repetitions and 'fillers' such as er..., like, well..., and you know. ...read more.

Also, with some words, the sound may actually be the same but when written down the words look dissimilar to one another. For example, NO, THOUGH, SEW, TOE and SHOW. There are many paralinguistic and prosodic features which are not available in writing but which are in speech. Volume, gesture, eye contact, stress, rhythm and intonation are all useful and important features in speech, which are difficult to replicate in writing. Punctuation can be used to some extent to convey stress and intonation. Intonation can enable the communicative function of an utterance to differ from its grammatical form. Eg: He saw you today - form: statement - function: statement He saw you today - form: statement -function: question Differences in intonation can also convey differences in meaning. This can occur in two ways: (1)the position of the stressed syllable within the intonation unit: or (2)the occurrence of intonation boundaries. ...read more.

In speech this can only be done if the pun is explained. There is also the case of accent and dialect. With most people, when they talk, you can tell where they come from by their dialect. It gives you an insight into what class they are, where they are from and gives you an idea of their character. However with writing it is not usual to write in dialect unless the writer is purposely trying to portray a certain type of character. Childrens' early attempts at writing often appear more like transcribed speech because they have not fully grasped the differences between writing and speech and have not gained mastery of the more formal aspects of writing. Speech and writing are both forms of communicating but both have differing qualities. There are major differences that have been outlined above which require different approaches by the person communicating. To be a successful and competent writer requires mastery of Standard English. Only when this has been achieved can a writer break the usual rules for stylistic reasons. ...read more.