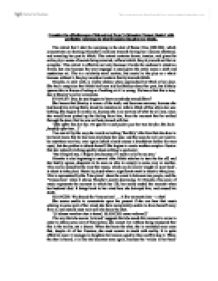 Consider the effectiveness of this extract from 'A Streetcar Named Desire' with particular reference to what it adds to the play as a whole.

Consider the effectiveness of this extract from 'A Streetcar Named Desire' with particular reference to what it adds to the play as a whole. The extract that I shall be analysing is the start of Scene Nine (200-204), which concentrates on showing Blanche's reactions towards having her illusions shattered, and revealing her past to Mitch. This extract contains drama, tension, and gives the entire play a sense of secrets being revealed, without which, the play would not feel as complete. This extract is effective not only because it holds the audience's attention firmly, but also because the way language is used gives the entire scene a dark and mysterious air. This is a relatively small section, but crucial to the play as a whole because without it, the play would not contain finality towards Mitch. Blanche, to start with, is visibly shaken when approached by Mitch at her door. She had a suspicion that Mitch has been told by Stanley about her past, but blithely ignores this in favour of acting as if nothing at all is wrong. We know that this is true, due to Stanley's earlier comments. STANLEY: Say, do you happen to know somebody named Shaw? She knows that Stanley is aware of the truth, and becomes nervous, because she had heard him telling Stella about his intention to inform Mitch of this while she was bathing. ...read more.

When she hears the shot, she is reminded once more that, despite all of her illusions, she must remain in touch with reality. It is quite effective since it manages to heighten the tension quickly, then swiftly stop it. When the shot is heard, it is like she becomes sane again, because the 'voices in her head' (which by a twist of dramatic irony are audible to the audience, but not to Mitch) have gone for the moment. Towards the middle of scene, the tension that has steadily been mounting throughout the scene (due to neither character so far confronting the other with the main topic of conversation) comes to a head. Mitch notices something crucial about Blanche; he notices the perpetual darkness in which Blanche exists. This darkness is both literal and metaphorical; Mitch tries to rectify this problem by using another blunt phrase: 'MITCH: I don't think I ever seen you in the light.' The way that he uses the word 'light' here could also imply that he has never seen Blanche's true personality, let alone her soul; her complex illusions disguise it, just as her fine clothes disguise her body. Mitch desperately wants the rumours to be proved false, yet to do so he must persuade Blanche to reveal her true self. This section is effective in making the audience sympathetic towards Blanche and Mitch alike; Blanche because the audience knows she will lose her one true chance of happiness, and Mitch because he wants to be able to trust Blanche, but will never be able to. ...read more.

The light terrifies her, and she cannot even bear the thought of letting herself be shown bare underneath it, since it can strip away all the lies. Mitch accidentally encourages her with this earlier, when he puts the paper lantern upon the light. BLANCHE: I can't stand a naked light bulb... Mitch then has to destroy this illusion, making it more effective because again, it concludes something that was begun earlier. She becomes increasingly hysterical throughout this speech, and seems to defend herself to more people than just Mitch, as if she is defending herself to an ethereal being. In the final sentence, she reaches a bitter end when all is revealed, despite her previous objections. As a whole, it gives the previous scenes more of a context as to the reasons for her being in disgrace, and lets the audience foresee a terrible future for Blanche. This passage from 'A Streetcar Named Desire' uses plot devices and dramatic elements to make the scene more effective, and more useful to the play. Symbolism gives this section a supernatural quality, when the lines between reality and illusion start to blur, and the characters struggle to define the lines for themselves. It allows the audience to make an informed decision on how they judge each character to be, but at the same time does not state how they should view it, but rather several options are provided. In the end, this scene can be seen as a turning point in that it leads directly towards to the tragic ending of the play. Word count: 1485 ?? ?? ?? ?? ...read more.