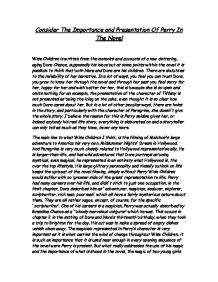 Consider The Importance and Presentation Of Perry In The Novel Wise Children is written from the memoirs and accounts of a now dottering, aging Dora Chance, supposedly his niece but at some points within the novel it is possible to think that both Nora and Dora are his children. There are doubts as to the reliability of her narrative. In a lot of ways, you feel you can trust Dora, you grow to know her through the novel and through her past you feel sorry for her, happy for her and wish better for her, this is because she is so open and omits nothing for an example, the presentation of the character of Tiffany is not presented as being the icing on the cake, even thought it is so clear how much Dora cares about her. But in a lot of other peculiar ways, there are holes in the story, and particularly with the character of Peregrine, she doesn't give the whole story. I believe the reason for this is Perry seldom gives her, or indeed anybody his real life story, everything is elaborated on and a storyteller can only tell as much as they know, never any more. ...read more.

All of Peregrine's entrances are of a Hollywood style, and larger-than-life, not least his final one, on Melchoir's and, of course, also his own hundredth birthday party. Before Melchoir even has a chance to cut his cake, he is interrupted by a loud banging on his big wooden door, which then flies open, revealing the figure of Peregrine, silhouetted against the sunlight, covered in butterflies, which storm the party, and he's singing `thunder and lightning! Did yez think I was dead?' And here he performs his greatest conjuring act of all- an act of resurrection. He doesn't actually resurrect anybody, but when Tiffany was assumed dead, lying at the bottom of a river, the way it really ended was, Peregrine took her with him on his travels. And he brought her to the party in a trunk, as his final and greatest conjuring trick. Amidst everything else that take place in the novel all we really know about Perry is that he traveled a lot, there is not much we do know about him. He claims to have fought in Mexico with Ambrose Bierce presenting a signed copy of The Devil's Dictionary as proof of this `in sole confirmation', as Dora says, but we don't know. ...read more.

?There is that very Hollywood quality about him, of razzle-dazzle, magic, and the mystery and illusion of the screen. ?And, as I said earlier on, he is larger-than-life. When I said this, I meant in both senses- not only is Peregrine the life, heart and soul of any and every gathering, the big extrovert with the mysterious air and the huge, exaggerated entrances, he is also physically a giant as constantly referred to by Dora throughout the novel. Although his body reflected his spirit, Dora commented on this, when he told her she hadn't changed a bit, only she knew she had certainly changed since the last time they were together. It can be questioned whether Dora saw more to that Perry than being wild, redheaded, powerful and at times a monster of a man, or was it simply the only way she saw him. Through rose-tinted glasses Dora conjured a love for him that can be viewed as inexplicitly wrong, but as readers we empathies with Dora as character, being confused and almost lost in a sea of illegitimacy through her whole life, and when she is with Perry It would appear that this washes away, until he leaves once again. ...read more.