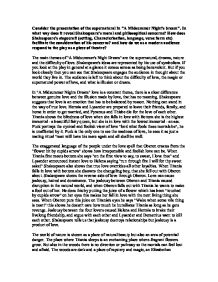 Consider the presentation of the supernatural in &quot;A Midsummer Night's Dream&quot;. In what way does it reveal Shakespeare's moral and philosophical concerns?

Consider the presentation of the supernatural in "A Midsummer Night's bream". In what way does it reveal Shakespeare's moral and philosophical concerns? How does Shakespeare's stagecraft (setting, Characterisation, language, verse form etc) facilitate the consideration of his concerns? and how do we as a modern audience respond to the play as a piece of theatre? The main themes of "A Midsummer's Night Dream" are the supernatural, dreams, nature and the difficulty of love. Shakespeare's ideas are represented by his use of symbolism. If you look at the play in general at a glance it comes across as being benevolent. But if you look closely then you can see that Shakespeare engages the audience in thought about the world they live in. The audience is left to think about the difficulty of love, the magic or supernatural power of love, and what is illusion or dream. In "A Midsummer Nights Dream" love is a constant theme, there is a clear difference between genuine love and the illusion made by love, that has no meaning. Shakespeare suggests that love is an emotion that has to be balanced by reason. Nothing can stand in the way of true love. Hermia and Lysander are prepared to leave their friends, family, and home in order to get married, and Pyramus and Thisbe die for the love of each other. Titania shows the blindness of love when she falls in love with Bottom she is the highest immortal - a beautiful fairy queen, but she is in love with the lowest immortal - an a*s. Puck portrays the cynical and foolish view of love "lord what fools these mortals be", he is unaffected by it. Puck is the only one to see the madness of love, he sees it as just a mating ritual "man will have his mare again and all shall be well. The exaggerated language of the people under the love spell that Oberon creates from the "flower hit by cupids arrow" shows how irresponsible and foolish love can be. ...read more.

When Titania and Oberon make up it leads to human reconciliation and blessing, and ends with music and harmony. The fairies are superior to humans, they are not restricted by time, place "I'll put a girdle round about the earth, In forty minutes!" or social rules, this is an extension of our aspirations and fantasies. The use of language suggests the fairies are never limited to a concrete appearance, Titania is able to embrace Bottom but the fairies can also "creep into acorn cups, wrap in a snakeskin, make coats from bat fur". As the king of the fairies Oberon represents power, but his mischievous use of power brings chaos and confusion. Oberon can make himself invisible and has such good eyesight that he has seen Cupid flying "between the cold moon and the earth". There is a dark side to Oberon, which can make him quite frightening. His jealousy caused mayhem in the natural world and his plan to get the changeling boy involved humiliating Titania. The audience sees that he can be selfish and expects, to get his own way and that he is prepared to be ruthless get what he wants. But also he is capable of feeling sympathy, he reverses the spell on Titania after he has got what he wanted, and he sympathises with Helena when he sees Demetrius treating her badly and tries to help her. The duality of his character can be seen when he uses his magic to help Helena, but at the same time uses it to humiliate Titania.'' Titania, the Queen of fairies is described by Oberon as "proud" because she refuses to agree to give him the changeling boy. Even in the fairy kingdom females are subservient to male and Titania challenges this as she is prepared to stand up to Oberon. When he says, "Am I not thy lord?" she replies with "Then I must be thy lady". ...read more.

Athens is a civilised world, which is governed by reason and order, the woods however, has no laws and no direction or pathway, imagination and love dictate what happens when the characters are in the wood they are in a dream-like state where reason is clouded. The woods represent the human imagination and mind when it's relaxed like when a person is on their own, in their own environment and Athens represents the human imagination and mind when it has to think about physical social limitations. In Elizabethan times there were only a limited amount of props and setting that Shakespeare could use. Therefore he had to take the audience to the fairy world using their imagination and his ability to create a place by using only words. Shakespeare uses his words very effectively by emphasising the beauty of the fairy world by using world like, orbs, gold coats and rubies. The sort of language that Shakespeare uses is an indication of the type of character that is speaking. Theseus, Hippolyta, Oberon, and Titania all use blank verse this shows that they have a high status. The workmen speak in prose this reflects their low status. Puck's language alludes to the darker side of the supernatural. He shows that good can not exist without evil. Puck speaks of midnight and darkness. Night-time is when humans are usually asleep and when magical creatures are about. Humans don't see very well in the dark so this is a time when we are more vulnerable and feel insecure. Puck also speaks about death and h**l "Now it the time of night, That the graves, all gaping wide, Everyone lets forth his sprite" humans are confused and scared about death, but Puck is aware of what happens after death. A modern day audience would be more doubtful about the existence of the Supernatural. But they suspend their disbelief so that they can see things from the character's point of view and get more into the story line. There is more props and better setting available to make the supernatural more believable. ...read more.

The essay title is quite wide-ranging, and the writer makes a good effort to cover all aspects of the question, often making effective use of textual reference or quotation to support the points made.
The essay could be further improved by a stronger conclusion, more accurate spelling and punctuation, and by more precise choice of vocabulary.