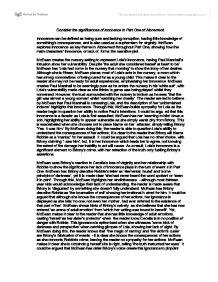 Consider the significances of innocence in Part One of Atonement.

Consider the significances of innocence in Part One of Atonement. Innocence can be defined as being pure and lacking corruption, having little knowledge of something's consequences, and is also used as a euphemism for virginity. McEwan explores innocence as key theme in Atonement throughout Part One, showing how the main characters' innocence, or lack of, forms the narrative plot. McEwan creates the nursery setting to represent Lola's innocence, having Paul Marshall's intrusion show her vulnerability. Despite 'the adult she considered herself at heart to be' McEwan has 'Lola had come to the nursery that morning' to show the irony of her desires. Although she is fifteen, McEwan places most of Lola's acts in the nursery, a room which has strong connotations of being cared for as a young child. This makes it clear to the reader she may not be ready for adult experiences, emphasising her innocence. McEwan creates Paul Marshall to be seemingly pure as he enters the nursery in his 'white suit', with Lola's vulnerability made clear as she thinks 'a game was being played' whilst they conversed. ...read more.

Through this, McEwan highlights her vindictiveness - although most thirteen year olds would acknowledge their lack of understanding, the reader is made aware that Briony is 'disgusted' by something she doesn't fully understand. McEwan has Briony describe Robbie as 'the incarnation of evil' showing her irrational hatred for him. It could be argued that although she knows the consequences of her actions, her ignorance is displayed as she tells 'no one, not even her mother, had ever referred to the existence of that part of her'. McEwan shows hints of Briony's naivety as she believes that she has now entered 'an arena of adult emotion' from 'which her writing was bound to benefit'. Yet, McEwan makes it clear to the reader that she has little knowledge of adult emotions, casting 'herself as her sister's protector' when the reader know Cecelia is in no position of danger with Robbie. This ignorance is epitomised when she witnesses 'some trick of darkness and perspective' when catching glimpse of Lola, showing her lack of sight. ...read more.

McEwan highlights the capacity of writing, telling 'her words summoned awful powers', yet, older Briony's view permeates as she comments if only she 'had been less innocent, less stupid' when allowing the story to write 'itself around her'. This innocence as shown through older Briony's hindsight is therefore significant in her crime - her inexperience in writing and her ability to turn visions into 'a statement of fact' are elements which contribute to her fabrication and lies. Thus, despite Briony's apparent lack of innocence causing her hatred for Robbie, it is her naivet� as a narrator, seeing writing 'an achievable form of flight' of 'the imagination' which results in the exacerbation of her vindictiveness. In conclusion, McEwan highlights the significance of innocence in Part One contributing to the destruction of the Tallis family and Robbie's wellbeing. An accumulation of Lola's innocence causing her not to act, as well as Briony's innocence in regards to writing, allows her lies to escalate. As McEwan has Briony write 'There was an old lady who swallowed a fly' he manages to highlight the cause of Robbie's downfall - Briony's lies which are aggravated by her literary innocence. ...read more.

This essay engages with the task well. I particularly liked how there was an exploration of what innocence means, and this clearly benefits this candidate as the essay becomes focused on the connotations and definition. Having a strong critical voice ...

This essay engages with the task well. I particularly liked how there was an exploration of what innocence means, and this clearly benefits this candidate as the essay becomes focused on the connotations and definition. Having a strong critical voice is essential at A-Level, and by engaging with the key terms in the question, you are showing the examiner you have this skill. There is a sustained focus on McEwan's techniques to present innocence, and further to that a discussion of why innocence is significant. I thought the point about Briony's literary innocence is very sophisticated, and there could've been more exploration of this point. If I were answering this question, I would looking at how McEwan uses older Briony and metafiction to make Briony seem more innocent as a child. Atonement can be a difficult text to analyse, but this essay does it well.

The analysis in this essay is strong. What I love about this essay is the way everything said has a relevance to the question, and there isn't a point which simply retells the plot. For example the comment "Although she is fifteen, McEwan places most of LolaÃ¢â‚¬â„¢s acts in the nursery, a room which has strong connotations of being cared for as a young child" is able to explore the technique concisely. This essay has a sustained focus on the reader response to the text. Examiners are looking for the significances of innocence to the plot, but beyond that the reader and critical responses. Phrases such as "this makes it clear to the reader" and "guides the reader" shows a strong ability to explore interpretations of the texts. Examiners are particularly keen to see interpretations being evaluated. For example "It could be argued that this innocence is a facade" is brilliant, but this essay does not draw upon which arguments are strongest. If I were writing this essay, I would be saying "this argument isn't as strong because" or "although this is one interpretation, it seems weaker because" to ensure the arguments are evaluated.

This essay has an excellent structure. The introduction is concise, engaging with the question and posing a strong argument. Paragraphs are logically picked, and the signposts are clearly relevant to the question. Opening sentences such as "McEwan has younger BrionyÃ¢â‚¬â„¢s lack of writing experience show her innocence" are a great way to start paragraphs. It summarises the points, making it clear to the examiner you aren't repeating anything, whilst staying closely focused on the question. The style here is brilliant - there is always a focus on McEwan's constructions, and how he constructs the novel to have a certain response. Phrases such as "therefore" and "as a result" show a clear progression through the argument, and the points follow very clearly. Spelling, punctuation and grammar are flawless.