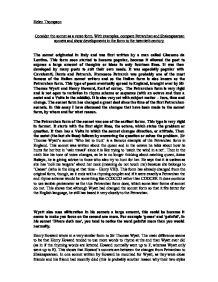 Consider the sonnet as a verse form. With examples, compare Petrarchan and Shakespearean sonnets and show developments in the form to the twentieth century.

Helen Thompson Consider the sonnet as a verse form. With examples, compare Petrarchan and Shakespearean sonnets and show developments in the form to the twentieth century. The sonnet originated in Italy and was first written by a man called Giacomo da Lentino. This form soon started to become popular, because it allowed the poet to express a large amount of thoughts or ideas in only fourteen lines. It was then developed by many poets to suit their own needs. It was especially popular with Cavalcanti, Dante and Petrarch. Francesco Petrarch was probably one of the most famous of the Italian sonnet writers and so the Italian form is also known as the Petrarchan form. This type of poem eventually spread to England, brought over by Sir Thomas Wyatt and Henry Howard, Earl of surrey. The Petrarchan form is very rigid and is not open to variation in rhyme scheme or sequence (with an octave and then a sestet and a Volta in the middle). It is also very set with subject matter - love, time and change. The sonnet form has changed a great deal since the time of the first Petrarchan sonnets. ...read more.

In the first octave of this sonnet he says that many people who criticised Wyatt while he was alive now say that they think that he a brilliant writer, but in the sestet he honours Wyatt's memory by saying things like 'what virtues rare were tempered in that breast', as he never doubted Wyatt's brilliance. Howard, like many other writers only made changes so that when he wrote his sonnets they were more personal. The Shakespearean form of the sonnet is normally thought of as the English sonnet form and is very different to the Petrarchan form, but still resembles it in some aspects. This form was originally developed by Howard but when Shakespeare adopted it he made some of his own changes. This form consists of three quatrains and a rhyming couplet at the end and the rhyme scheme is more flexible (mainly because there are less rhyming words in English). This form has another difference which is that it effectively has three Voltas, with three different statements and then the resolution comes in the final two lines. Yet, he did not change some things, he used iambic pentameter and the same themes (love, time and change) ...read more.

She has divided her sonnet into verses, four verses with three lines and then a couplet at the end which does not rhyme, and this would have probably never been considered by writers such as Petrarch. Jennings does develop her ideas, just as a Petrarchan sonnet writer would have done, but she allowed her developing idea to flow between the verses and so there is no clear break, turn or Volta. Jennings sonnet has also lost its iambic pentameter format and therefore reads more like a piece of prose. Since the 16th century, the sonnet form has changed a great deal, from the original Petrarchan form, with its strict rhyme scheme, iambic pentameter rhythm, Volta in the middle and subject matter of love, time or change to the present day sonnet, which almost cannot be identified as a sonnet. It has no strict rhyme scheme, it does not always have an iambic pentameter rhythm, it does not have to have a Volta and it has no particular subject matter. These changes have normally been because the writer wanted to make their sonnets personal to themselves or occasionally because the change made it easier to write. Whatever the reason, these changes have led to many different types of sonnet being written. ...read more.