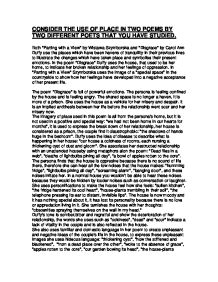 consider the use of place in two poems you have studied.

CONSIDER THE USE OF PLACE IN TWO POEMS BY TWO DIFFERENT POETS THAT YOU HAVE STUDIED. Both "Parting with a View" by Wistawa Szymborska and "Disgrace" by Carol Ann Duffy use the places which have been havens of tranquility in their previous lives to illustrate the changes which have taken place and symbolise their present emotions. In the poem "Disgrace" Duffy uses the house, that used to be her home, to indicate her broken relationship and her feelings of oppression. In "Parting with a View" Szymborska uses the image of a "special space" in the countryside to show how her feelings have developed into a negative acceptance of her present life. The poem "Disgrace" is full of powerful emotions. The persona is feeling confined by the house and is feeling angry. The shared space is no longer a haven, it is more of a prison. She uses the house as a vehicle for her misery and despair. It is an implied antithesis between her life before the relationship went sour and her misery now. The imagery of place used in this poem is all from the persona's home, but it is not used in a positive and special way: "we had not been home in our hearts for months", it is used to express the break down of her relationship, her house is considered as a prison, the couple find it claustrophobic: "the shadows of hands huge in the bedroom". ...read more.

Duffy uses enjambements to show how she can't control her anger "to make it worse...and worse", it shows the relentless decline of her relationship. "Total...disgrace", she is regretful for what has happened to her and she is ashamed for letting it happen, but she can't do anything about it. This continuous progression is also demonstrated by the degeneration movement from "words" in the beginning of the poem to "vowels" in the end of it. In the first six stanzas there is an unpleasant silence in the house, but it all changes in the last two stanzas, when the couple have a fight and there is more noise: "vulnerable flowers unseen in the dusk as we shouted in silhouette", "inconsolable vowels from the next room", there are no more words to explain her feelings. The poem "Parting with a View" is relatively calm. The persona is at the stage when she has accepted her loss, but she has not reached a point in her grief where the familiar places give her tranquility, she still feels too empty and vulnerable to find solace in shared places. She is trying to come to terms with the loss of her loved one by a process of logical analysis and she has gone to a special countryside open space because she wants to leave the past behind and be able to live without her beloved. ...read more.

Szymborska has divided this poem into thirteen stanzas of three to five short sentences each, each one reflecting a different view from the lake and she is accepting and allowing anything that might happen in this view that doesn't involve her: "it doesn't pain me to see that clumps of alders above the water have something to rustle with again". She is trying to control her grief by organising the poem into similar stanzas, but it is more natural and fluid than in Duffy's poem maybe showing that the natural environment where she is allows her to be less rigid, knowing that there is no solution and accepting the situation, because Duffy is trying to control really chaotic emotions, she has not gone past to the stage of emotionless. On one side, the Carol Ann Duffy poem creates a more vital image because to her the house symbolises anger and despair. On the other side, the Wistawa Symborska poem is much more morose and self-pitying, it is acceptance of her situation, but almost a "signing off" of life. Personally, I found both poems very interesting, however I found "Parting with a view" more startling because there is a contrast between her view of spring and a lake with her emotions of mourning and sadness for the loss of her lover. ...read more.