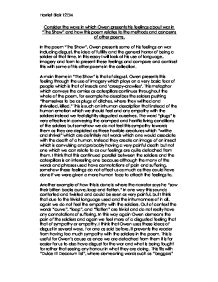 Consider the ways in which Owen presents his feelings about war in &quot;The Show&quot; and how this poem relates to the methods and concerns of other poems

Consider the ways in which Owen presents his feelings about war in "The Show" and how this poem relates to the methods and concerns of other poems. In the poem "The Show", Owen presents some of his feelings on war including disgust, the idea of futility and the general horror of being a soldier at that time. In this essay I will look at his use of language, imagery and form to present these feelings and compare and contrast this with some of his other poems in the collection. A main theme in "The Show" is that of disgust. Owen presents this feeling through the use of imagery which plays on a very basic fear of people which is that of insects and 'creepy-crawlies'. This metaphor which conveys the armies as caterpillars continues throughout the whole of the poem, for example he describes the solders pushing "themselves to be as plugs of ditches, where they writhed and shrivelled, killed." This is such an inhuman description that instead of the human emotion which we should feel and any empathy with the soldiers instead we feel slightly disgusted ourselves. The word "plugs" is very effective in conveying the cramped and horrific living conditions of the soldiers but somehow we do not feel this sympathy towards them as they are depicted as these horrible creatures which "writhe and shrivel" which are definitely not words which one would associate with the death of a human. ...read more.

These are effective because they seem slightly unnatural as opposed to if none had been used, and therefore give a sinister and perhaps unnerving atmosphere to the poem. I think that this is also more successful than if a regular scheme of rhyme and form had been used because this would be too ordinary and expected and therefore not have had the same effect. This also works with the idea that it is quite often more unnerving when something everyday and normal (such as a poem with no rhyme) is changed very slightly (such as using half rhymes) than if it were changed completely. This idea is also used in the poem "Strange Meeting", where half rhymes and alliteration such as "groined/groaned/grained/ground" build up to provide us with a rather gothic and nightmarish world which the 'gr' sounds accentuate the vastness and oldness of it by making us relate it to the groans and grinding which would be the sounds in such a place. Another poem which makes use of half rhymes to produce the surreal, dreamlike effect achieved in these is "Miners", where every other line echoes each other which gives it a ghostly effect, for example "simmer/summer" and "cauldron/children". This works with the idea of the poem as seems to reflect the ghosts of the past, or "steam phantoms... ...read more.

I think this shows the reader that Owen disagrees with and has anger towards the war as a whole, but his feelings seem to change a little at a closer and more empathetic level. Overall, Owen's main feeling which he discusses in "The Show" is that of disgust and distaste to the war and what it does to people, specifically by displaying it as a disease or "plague" which is sweeping the countryside. This is almost like "Mental Cases" on a much larger scale, as in "The Show", the disease is effecting and spreading across everything in its path whereas in "Mental Cases" he presents a similar idea of 'disease' but this time it is more of a disease of the mind which has taken over the soldiers with shell-shock. He also presents the feeling of futility through this disgust, demeaning the deaths of the soldiers and pointing out that both sides were eating each other, suggesting that neither could ever win. Another feeling which he conveys is that of a slight sadness, through the use of the creepy and unnerving view of this scarred land there is a tone of unhappiness behind it as well which keeps the reader reasonably engaged on an emotional level to prevent all the harshness from becoming too much. The techniques used to do this are very varied, including the imagery, language, tone, structure and form, and altogether "The Show" presents just one of various different viewpoints Owen takes towards the war through this collection of poetry. ?? ?? ?? ?? Harriet Blair 12EM ...read more.