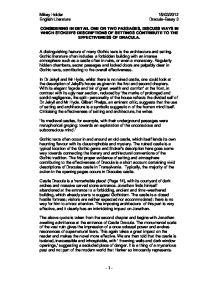 CONSIDERING IN DETAIL ONE OR TWO PASSAGES, DISCUSS WAYS IN WHICH STOKERS DESCRIPTIONS OF SETTINGS CONTRIBUTE TO THE EFFECTIVENESS OF DRACULA.

CONSIDERING IN DETAIL ONE OR TWO PASSAGES, DISCUSS WAYS IN WHICH STOKER'S DESCRIPTIONS OF SETTINGS CONTRIBUTE TO THE EFFECTIVENESS OF DRACULA. A distinguishing feature of many Gothic texts is the architecture and setting. Gothic literature often includes a forbidden building with an intense atmosphere such as a castle often in ruins, or even a monastery. Regularly hidden chambers, secret passages and locked doors are palpably clear in Gothic texts, contributing to the overall effectiveness. In Dr Jekyll and Mr Hyde, whilst there is no ruined castle, one could look at the description of Jekyll's house as given in the first and second chapters. With its elegant fa�ade and 'air of great wealth and comfort' at the front, in contrast with its ugly rear section, reduced by 'the marks of prolonged and sordid negligence, the split- personality of the house reflects the divided self of Dr Jekyll and Mr Hyde. Gilbert Phelps, an eminent critic, suggests that the use of setting and architecture is a symbolic suggestion of the human mind itself. Criticising the effectiveness of setting and architecture, he writes 'Its medieval castles, for example, with their underground passages were metaphorical groping: towards an exploration of the unconscious and subconscious mind.' Gothic texts often occur in and around an old castle, which itself lends its own haunting flavour with its claustrophobia and mystery. ...read more.

I saw something like them in Hampton Court, but they were worn and frayed and moth-eaten. But still in none of the rooms is there a mirror. There is not even a toilet glass on my table, and I had to get the little shaving glass from my bag before I could either shave or brush my hair. I have not yet seen a servant anywhere, or heard a sound near the castle except the howling of wolves. Some time after I had finished my meal, I do not know whether to call it breakfast or dinner, for it was between five and six o'clock when I had it, I looked about for something to read, for I did not like to go about the castle until I had asked the Count's permission. There was absolutely nothing in the room, book, newspaper, or even writing materials, so I opened another door in the room and found a sort of library.' This extract, taken from Jonathan's diary, shows Jonathan's curiosity of Dracula's Castle. He begins by saying there are numerous odd absences of objects that he expected to find in Dracula's house. He notices Dracula's vast wealth, due to the 'gold, and so beautifully wrought' table service. He also notices that the upholstery and curtains are in excellent order, and he makes the absence of mirrors known to the reader. ...read more.

It says on page 208 'The light from the tiny lamps fell in all sorts of odd forms, as the rays crossed each other, or the opacity of our bodies threw great shadows. I could not for my life get away from the feeling that there was someone else amongst us. I suppose it was the recollection, so powerfully brought home to me by the grim surroundings, of that terrible experience in Transylvania. I think the feeling was common to us all, for I noticed that the others kept looking over their shoulders at every sound and every new shadow, just as I felt myself doing. The whole place was thick with dust. The floor was seemingly inches deep, except where there were recent footsteps, in which on holding down my lamp I could see marks of hobnails where the dust was cracked.' The word 'diabolic' springs to mind whilst reading this description of the scene at Carfax, a word that also appears numerous times in 'The Castle of Otranto,' another famous gothic novel. Nissim Ezekiel, a poet who has been influenced by atheist views, wrote a poem called 'Night of the Scorpion,' about when he was a child and he recounts a story about his mother being stung by a scorpion. The line 'flash of diabolic tail in the dark room,' is comparable to this scene in Dracula, where the diabolic sense is seen as symbolic of the devil. ...read more.