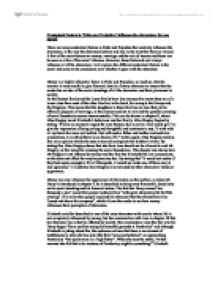 Contextual Factors in Pride and Prejudice(TM) influence the characters. Do you agree?

Contextual Factors in 'Pride and Prejudice' influence the characters. Do you agree? There are many contextual factors in Pride and Prejudice that certainly influence the characters, in the way the characters behave and also in the way that they are viewed. A few of the main factors are money, marriage and the role of women and these can be seen as a few of the novel's themes. However, these factors do not always influence all of the characters. I will explore the different contextual factors in the novel and come to the conclusion as to whether I agree with the statement. Money is a highly influential factor in Pride and Prejudice, so much so, that the narrator is very careful to give financial details of every character to ensure that the reader has an idea of the social standings of all the characters and their placement in society. As the Bennet family and the Lucas family have less money, this means they are of a lower class than most of the other families in the book, for example the Darcys and the Bingleys. This means that the daughters in these families are less likely to be offered a proposal of marriage, as the classes tend not to mix and the possible crossing of social boundaries seems insurmountable. ...read more.

Property can also be seen as a beneficial factor that influences the perception of characters because at this time the larger the estate then more money was earned. This can be seen in the description of Mr Darcy in chapter 3, where the people at the ball thought very highly of him when they heard about the size of his estate in Derbyshire, which directly relates to his earnings. A contextual factor that influences all the women characters in the novel is marriage. A perfect example of this is in Charlotte Lucas marrying Mr Collins, as she does not marry for love, she marries him to be financially secure and to have a place in society. This can be seen in the quote by the narrator describing Charlotte, "who accepted him solely from the pure and disinterested desire of an establishment". This shows that Charlotte married only for an estate and money, so that she could establish herself in society as women were looked down upon if they were not married. As the life expectancy for women in the early 1800's was around the mid to late 30s and Charlotte was 28, she saw that marriage was the only honourable provision for a woman in her position and wealth. ...read more.

mind" and the spirited freedom of her thinking about her world, even in spite of the pressures cause by its snobbery and narrowness of society. In conclusion, the contextual factors do influence many of the characters in the novel, but some of these characters are able to overcome the pressures of society and cross the social boundaries. By using Elizabeth as a main character, Austen is able to highlight these factors as she is not influenced by them and causes others around her to rebel against the norm. The main character highlights what is expected of women and the 'norms and values' in society during the nineteenth century by behaving in an unacceptable way. The fact that in chapter eight, when Elizabeth walks to Netherfield to visit her sister, and her appearance is deemed improper by the Bingley sisters, "her petticoat, six inches deep in mud", is one of the main reasons why Darcy falls in love with Elizabeth, shows that some men prefer women with an independence of mind and a free spirit. This is not in agreement with society, where it is believed women should depend on men and all act very similar with no specific purpose as they are just possessions of men. ...read more.