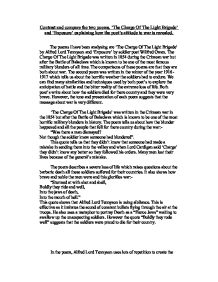 Contrast and compare the two poems, 'The Charge Of The Light Brigade' and 'Exposure' explaining how the poet's attitude to war is revealed. The poems I have been analysing are

He also tells us how much the soldiers didn't know what they was running into. Lastly, The reason of the poem being wrote is to show the insanity of the leaders to send 600 soldiers the wrong way to their potential deaths. However, he glorifies war by showing how brave the men were to die for there country. It is easy to imagine that this poem can boost the morale of other troops:- "Honour the charge they made! Honour the Light Brigade, Noble six hundred!" In this quote Tennyson suggests that we should be proud of the soldiers and honour the sacrifice they made. By putting 'noble' in this shows that they were proud to die for their country and it was the only thing to do. On the other hand, the poem 'Exposure' is much more sadder and it reflects what the soldiers did for their country. However, both poems are about the horror of war. In Owens poem he doesn't say that the soldiers are heroes. It is sad as it sets the tone of the poem and also he doesn't praise the soldiers so there is nothing to be happy about:- "Watching, we hear the mad gust tugging on the wire, Like twitching agonies of men among its brambles". ...read more.

"Northward, incessantly, the flickering gunnery rumbles, Far off, like a dull rumour of some other war The repetition of "but nothing happens" throughout the poem reiterates the senselessness of the whole ordeal and forces us to ask 'why on earth are these men allowed to die in such an inhumane way?' Therefore, I conclude that both poets focus on the bitter reality of war, stressing particularly the extreme loss of life and the horrific manner in which the soldiers died for their country. Both poems are particularly powerful and use lots of techniques. We can clearly imagine the sights and sounds that the soldiers faced. Both poets address the reader directly making us ask ourselves questions about the purpose and worth of war and the lives lost. The most effective poem, in my opinion is 'Exposure' this is because it tells us how much the soldiers suffered and it doesn't give them any praise so its seems like the poet is trying to say that they knew what they were getting into. Also he tells us about the bitter weather they had been threw which seems worse than getting killed by a cannon as being in cold weather is much more painful. ?? ?? ?? ?? ...read more.