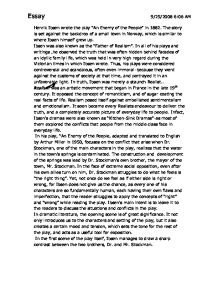 Contrast of two brother's in Ibsen's &quot;An Enemy of the People&quot;

Henrik Ibsen wrote the play "An Enemy of the People" in 1882. The story is set against the backdrop of a small town in Norway, which is similar to where Ibsen himself grew up. Ibsen was also known as the "Father of Realism". In all of his plays and writings ,he observed the truth that was often hidden behind facades of an idyllic family life, which was held in very high regard during the Victorian times in which Ibsen wrote. Thus, his plays were considered controversial and scandalous, often even immoral-because they went against the customs of society at that time, and portrayed it in an unfavorable light. In truth, Ibsen was merely a staunch Realist.. Realism was an artistic movement that began in France in the late 19th century. It opposed the concept of romanticism, and of sugar coating the real facts of life. Realism posed itself against embellished sentimentalism and emotionalism. It soon became every Realists endeavour to deliver the truth, and a completely accurate picture of everyday life to people. Infact, Ibsen's dramas were also known as "Kitchen-Sink Dramas"-as most of them explored the conflicts that people from the middle class face in everyday life. ...read more.

Stockman's character indicates his love for disciple, order and authority, and perhaps even his concern for the welfare of the people. Very soon after his arrival, Mr. Stockman begins to make Catherine, Dr. Stockman's wife, extremely uncomfortable, by continually criticizing the way in which the Stockman household is run, frowning disapprovingly on the apparent extravagance. Peter Stockman's subtle, implied criticism give us a hint about his impression of his brother the Doctor. This is further exemplified when Catherine says to him, "You sound as though Tom and I throw money out the window", and he replies by saying, "Not you Catherine", thus making it clear that he thinks that it is all Dr. Stockman's doing. In this way, the dialogue between Catherine and Mr. Stockman builds up an undercurrent of hostility that only intensifies as the scene progresses. The selfish and egotistical side of Mr. Stockman's personality also shows up when Hovstad, the editor of the local newspaper, suggests that "Dr. Stockman created Kisrten Springs". Mr. Stockman quickly becomes offended by this remark and retorts by saying that he felt that he too had a "certain modest part" to play in its creation". Another contrast between the two brothers when, on enquiring about the Doctor's whereabouts, Catherine tells Mr. ...read more.

This accusation enrages the Doctor, who denies it completely. The next few lines spoken by Mr. Stockman ( "You have an ingrained tendency.....general welfare" ) tells us a great deal about his morals and ideals. He is a man who feels that individual desires and goals should bow down to society's will and well being. This shows us how political he is in his thinking. Mr. Stockman walks out in a huff, and his exit has a rather ominous and foreboding feeling to it, as he says the line "someday you might pay dearly for it". This is Ibsen foreshadowing the tragedy that befalls Dr. Stockman towards the end of the play. The reader already knows what Mr. Stockman feels about his brother, and after he has left, the Doctor too voices his opinion by saying ,"Peter is a lonely man. Poor fellow, all he knows is official business and duties". In this way, Ibsen manages to create a sharp contrast between the two brother's personalitites and outlook on life in the very first scene of the play. Tension and drama begins to build up as the two brothers quarrel and argue, and this sets the tone for the remainder of the play, which sees Dr. Stockman struggle not only against his own brother, but the entire town community. Essay 23/09/08 7:03 PM 23/09/08 7:03 PM 23/09/08 7:03 PM ...read more.