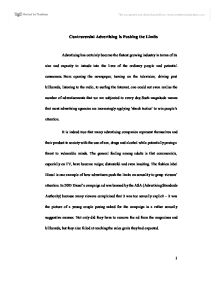 Controversial Advertising is Pushing the Limits

Controversial Advertising is Pushing the Limits Advertising has certainly become the fastest growing industry in terms of its size and capacity to intrude into the lives of the ordinary people and potential consumers. From opening the newspaper, turning on the television, driving past billboards, listening to the radio, to surfing the Internet, one could not even realise the number of advertisements that we are subjected to every day. ...read more.

The fashion label Diesel is one example of how advertisers push the limits on sexuality to grasp viewers' attention. In 2005 Diesel's campaign ad was banned by the ASA (Advertising Standards Authority) because many viewers complained that it was too s******y explicit - it was the picture of a young couple posing naked for the campaign in a rather s******y suggestive manner. Not only did they have to remove the ad from the magazines and billboards, but they also failed at reaching the sales goals they had expected. ...read more.

To conclude, it seems that controversial advertising is on the increase despite its unpredictable outcome. Agencies' needy obsession for campaigns to play in the news is only growing and it is getting to such an extent that some are losing sight of basic moral standards. In their frequent belief that 'no publicity is bad publicity' they forget that the consumer is only going to feel positively attracted to the campaign if the company's advertising is fresh and attention grabbing but more importantly respectful and truthful in its style. ?? ?? ?? ?? 1 ...read more.

The essay is average; it makes good points and has a very good layout but there needs to be more expansion and analysis. While good points are made here, the essay is simply too short, it needs to be greatly expanded upon with more examples given and a better argument. The example of the Diesel advert is a very good one, what would also add to the essay is an example of a controversial piece of advertising which has gone on to be a success and has not been removed. Also it would be interesting to look at shock tactics other than sex, perhaps mentioning violence/gore or even the shock tactics used in charity adverts in order to make people notice them. This shows that you've fully thought through the question and know a lot about the topic instead of just focusing in on one point. The examiner won't know you are aware of other things unless you mention them.

There needs to be much more analysis. In paragraph 3 it would be useful to have more examples as this would show how they are not just stating a fact but there is something to back up what they are saying. Also when discussing the Diesel advert it would be useful to discuss adverts which have a similar amount of nudity but have been allowed. This would show that the student is thinking about both sides. I would also have addressed why shock tactics work, how they make the audience pay attention and see their products, plus by creating a buzz about the advert it generates discussion which then furthers promotion. To contrast to shock tactics I would also talk about highly successful adverts which are not to do with shock tactics, such as the Compare the Market/Meerkat adverts. This would show a more rounded answer.

While the layout is very good there are some errors. The student should not shorten advert to ad as it is too colloquial for an essay where you need to maintain a formal style in order to show to the examiner that you can argue your point correctly. On the whole the introduction is strong, setting out what the essay is going to talk about but also being attention grabbing. By having a clear introduction it makes the essay easier to follow and also helps organise your thoughts. The conclusion is also good as it sums up the essay and comes to a clear decision on the topic. However it mentions what it things advertisers should be doing (cleaner adverts) but hasn't previously talked about this in the essay. If they had included a point about how advertising can be highly successful without being suggestive it would fit into the conclusion better as well as making it a better essay on the whole.