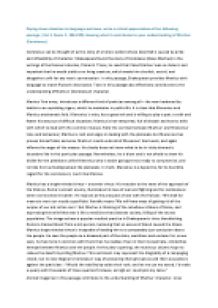 Coriolanus, write a critical appreciation of the following passage, (Act 1, Scene 1, 146-210) showing what it contributes to your understanding of Martius (Coriolanus).

﻿Paying close attention to language and tone, write a critical appreciation of the following passage, (Act 1, Scene 1, 146-210) showing what it contributes to your understanding of Martius (Coriolanus). Coriolanus can be thought of as the story of a heroic soldier whose downfall is caused by pride and inflexibility of character. Shakespeare found the story of Coriolanus (Caius Martius) in the writings of the Roman historian, Plutarch. There, he read that Caius Martius ?was so choleric and impatient that he would yield to no living creature, which made him churlish, uncivil, and altogether unfit for any man?s conversation?. In this passage, Shakespeare provides Martius with language to match Plutarch description. Tone in this passage also effectively contributes to the understanding of Martius? (Coriolanus?) character. Martius? first entry, introduces a different kind of patrician among all ? the man hardened by battle to an unyielding rigour, which he maintains in public life. It is clear that Menenius and Martius aredramatic foils. Menenius is wise, has a great wit and is willing to play a part, to talk and flatter his way out of difficult situations. Martius is hot-tempered, full of disdain and has no skills with which to deal with the common masses. ...read more.

This sentiment may represent the illogicality of a rampaging crowd, but no less illogical is Coriolanus? way of answering their grievances and their accusations against the patricians : ?Would the nobility lay aside their ruth, and let me use my sword, I?d make a quarry with thousands of these quarterd?d slaves, as high as I could pick my lance.? Animal imageries in this passage contribute to the understanding of Martius? character. Lines 147-71 are a tirade of scornful abuse against the plebeians which contains many antitheses: peace/war, lions/hares, foxes/geese. These intensify and deepens imaginative effect, creating and giving insight into Martius? feelings and thoughts, thus we are able to gain impression of Martius? character. When Caius Martius erupts into the play at line 146, Immediately the pace and tone of the scene changes from passive to active, his contempt of the plebeians ironically paralleling their earlier criticism of him, as he accuses them of being made ?proud? and describes them as ?curs?. Within his first speeches the audience are given a clear demonstration of his arrogant contempt for the fickle citizens that he regards as the diseased parts of the body that is Rome, his anger at the thought of giving power to those he considers unworthy of it as cowards ...read more.

Martius is an inflexible, arrogant heroic warrior, whose courage and perseverance win every match on the battlefield. He is hot-tempered and is also filled with pride. He disrespects the commoners, feeling they are not as smart as the patricians and are unfit to even be represented in the government. Since they do not share his values, Martius refuses to hide his dislike for them. He is always brutally honest and speaks his mind. He believes the commoners are inconstant and cowardly, and he clearly tells them so. These are effectively portrayed by Shakespeare through language and tone. Martius? language matches Plutarch?s description of Martius. His tones when speaking to the plebeians are of a sneering, dismissive ridicule, menace and ironic tone. Everyone, it seems, has an opinion to express about Caius Martius, and those opinions, appropriately for this play, are conflicting. There is very little soul-searching or questioning through soliloquy in Caius Martius Coriolanus. Our knowledge and understanding of the man, therefore, relies on what is said about him and by him, and through observation of his actions and interaction with others in the play. Nazihatul Afifah Bte Hj Abd Hamid PU2B ...read more.