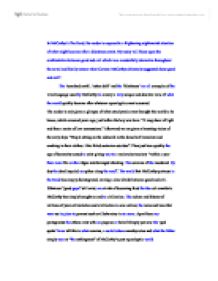 In McCarthy's The Road, the reader is exposed to a frightening nightmarish situation of what might become after a disastrous event. My essay will focus upon the confrontation between good and evil which is so wonderfully dramatize throughout the novel and finally answer what Cormac McCarthy ultimately suggested about good and evil?. The 'scorched earth', 'ashen drift' and the 'Blackness' are all examples of the vivid language used by McCarthy to convey a very unique and desolate view of what the world quickly became after whatever apocalyptic event occurred. The reader is only given a glimpse of what cataclysmic event brought the world to its knees, which occurred years ago, just before the boy was born: "A long shear of light and then a series of low concussions." Afterward we are given a haunting vision of the early days: "People sitting on the sidewalk in the dawn half immolate and smoking in their clothes. Like failed sectarian suicides". Then just how quickly the age of humanity ceased to exist giving way to a malevolent society: "within a year there were fire on the ridges and deranged chanting. The screams of the murdered. By day the dead impaled on spikes along the road". The world that McCarthy portrays in the Road has simply disintegrated, leaving a clear divide between good and evil. Whatever "good guys" still exist, are at risk of becoming food for the evil cannibals. McCarthy has simply brought an end to civilization. The culture and history of millions of years of evolution and civilization is now extinct, the rules and laws that were set in place to prevent such evil behaviour is no more. ...read more.

This seems to highlight the words importance and goes some way to describing the world seen by our protagonists. The "barren" emphasises the lost of humanity and the infertile nature of the land, which is their reason for hunger. The silence seems to signify the perils of the land and the need to be silent so as not to be notice and also the lack of life in the world and "godless" for it seems that immorality has become the new way of life. Because it is "Barren" and "silent" the world would automatically become godless, hence the order "Barren, silent, godless". McCarthy also uses elements of poetry when setting a scene "they set out along the blacktop, the gun metal light, shifting through the ash". He uses a metaphor to describe the relationship between the sun and the landscape. The use of the word gun-metal gives the impression of a cold grey shine making the world seem dangerous and sinister. Also the use of the word "shifting" conveys the sun as if it is trying to enlighten a depressed earth with no success. This is similar to another description of the sun trying to illuminate the earth "By day the banished sun circles the earth like a grieving mother with a lamp." This quote seems to epitomize the fact that the sun never breaks through the grey dust storms of the nuclear winter In terms of structure, McCarthy follows his own rules. For instance the omission of chapters gives the book a continuous flow. ...read more.

But its not. I know you're scared. That's ok. I think there may be thing in there and we have to take a look......this is what good guys do. They keep trying. They don't give up". And this time they uncover a bunker full of food, clothing, fresh water etc. just as the find there deliverance from death: he'd been ready to die and now he wasn't going to" and enjoy second helpings of canned pears, McCarthy cruelly and somewhat evilly tell us that they cant stay there long. I those two scenes epitomize the road by Cormac McCarthy as it shows us the fine balance between good and evil. Because the cannibalistic others have lost all humanity they would have never of found that bunker. But our protagonists, with their hope and belief. Keep trying and although all might seem lost, the roads show us that good things will happen to those that are tolerant, believe and never lose faith. Another contrast between good and evil comes at the end of the story with the death of his father. Even though this is widely anticipated, the death of his fathers leaves the boy is a rather precarious position. The boy has lost his only form of protection and is left holding the revolver. it is ironic that is boy saviours comes in the form of "good guys" which the son ever gave up hope in. and the boy is left to go on without his father carrying with him all the things he learned from him. ...read more.