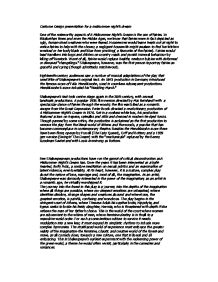 Costume Design presentation for a midsummer night's dream One of the noteworthy aspects of A Midsummer Night's Dream is the use of fairies. In Elizabethan times and even the Middle Ages, we know that fairies were in fact depicted as ugly, human-sized creatures who were feared. Housewives would leave treats out at night to entice fairies to help with the chores; a negligent housewife might awaken to find her kitchen wrecked or her body black and blue from pinching( a favourite of the fairies). Fairies would lead travellers into bogs and ditches on country roads and punish immoral behaviour by killing off livestock. Worst of all, fairies would replace healthy newborn babies with deformed or diseased "changelings." Shakespeare, however, was the first person to portray fairies as graceful and caring (though admittedly mischievous). Eighteenth-century audiences saw a number of musical adaptations of the play that used little of Shakespeare's original text. An 1843 production in Germany introduced the famous score of Felix Mendelssohn, used in countless subsequent productions. Mendelssohn's score included his "Wedding March." Shakespeare's text took centre stage again in the 20th century, with several landmark productions. ...read more.

Rhyming couplets replace blank verse as the magic of the green world starts to transform even their urban setting. The dream has begun. This forest is a fluid environment, crammed with lovers' tiffs and impending storms. Nature is alive and in full flux as the fairies share names with common insects and flowers; the first time we hear them-Mustardseed, Peaseblossom, Mote, Cobweb-we are treated to a glorious list of richly textured nature: apricocks and dewberries, purple grapes and green figs, mulberries, honey-bags, waxen thighs and fiery glow-worms' eyes. This is the world of love, fantasy and s****l play (more on Titania's part than on Bottom's; it is significant that he seems more interested in being chummy with the Queen's minions than in responding to her advances). Here lovers conduct amorous rehearsals, and in the same spot, blue-collar tradesmen practice the art of make-believe. Within nature's depths, the problems of the court, though not forgotten, are given imaginative play. Who is in love with whom? Who belongs to whom? Does Lysander really love Hermia? Or does he harbor a deep-seated desire for Helena? Does Demetrius want Hermia or Helena? ...read more.

Has the spirit of the green world modulated the strict cadences of Theseus' palace? He certainly appears kinder and more generous than at the beginning, as he sits through the festivities with an amused tolerance. At the end of the evening the fairies enter the court, and as they wander through the castle, they bring a woodsy flavour, replete with the magic and turbulence they always carry, into the heart of this urban centre. But their invasion has a beneficent goal, for Oberon promises to bless this palace with "sweet peace." The physical presence of the mystical, imaginative world finally imbues Theseus' city with the grace, charm and tolerance that were missing at the beginning. Period Elizabethan costumes are used to bring a traditional aspect to the production. The costumes need to be practical and not just historically accurate. Therefore concessions have been made for ease of movement and to minimise the weight. Authentic Elizabethan fashion was very elaborate, involving boned corsets, b*m rolls and steel-hooped farthingales which would have restricted the wearer greatly. Given the degree of physicality required from the actors, such details are not feasible - it would make turning a lover into a mechanical virtually impossible in only a few seconds in the wings! TITANIA HIPPOLYTA these characters will often be doubled up. OBERON THESEUS ...read more.