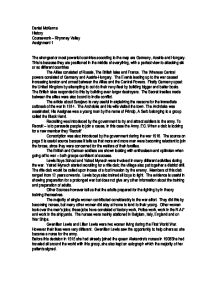 Daniel McKenna History Coursework - Rhymney Valley Assignment 1 The strongest or most powerful countries according to the map are Germany, Austria and Hungary. This is because they are positioned in the middle of everything, with a perfect view to attacking six or so different countries The Allies consisted of Russia, The British isles and France. The Whereas Central powers consisted of Germany and Austria-Hungary. The Events leading up to the war caused increasing tension and unrest between the Allies and the Central Powers. Firstly Germany upset the United Kingdom by attempting to out do their navy fleet by building bigger and better boats. The British Isles responded to this by building even larger destroyers. The Secret treaties made between the allies were also bound to incite conflict. The article about Sarajevo is very useful in explaining the reasons for the immediate outbreak of the war in 1914. The Archduke and his wife visited the town. The Archduke was asasinated; His Assignee was a young man by the name of Princip, A Serb belonging to a group called the Black Hand. Recruiting was introduced by the government to try and attract soldiers to the army. To Recruit - Is to persuade people to join a cause, in this case the Army. ...read more.

In her writings she tells how the village was very excited when a soldier would come home on leave. She was also in charge of cleaning her local rifle range every morning. The sources are useful in telling us how women's lives changed during the war - we are told that the women took over many of the men's jobs. I.e. factory work, mining etc. Because of this voting for women was being pushed. As a result of the war women's independence raised dramatically - many carried on with their jobs even after the war. Women over 30 were granted the ability to vote in 1919. Women were no longer seen as just housewives. However the sources do not tell us what happened to women's lives after the war. Other Sources inform us that even after the great effort they put in during the war, when hostilities ceased on 1918 the bureaucrats boondoggled and plans for women to be introduced into the military were scrapped by the recalcitrant war department. Besides this at least 3 army nurses were awarded the distinguished service cross, our nations second highest military honor, several received the distinguished service medal, the nations highest non combat medal and on top of this twenty more were awarded the French Croix de guerre. ...read more.

Factories were working around the clock to ensure that the army was as well equipped as possible. Bomb factories were also placed under the same conditions. These were hard times for workers. Throughout the course of the war the attitudes of many people changed dramatically. This was down to many factors. Firstly the introduction of the highly controversial system of rationing was a big shock to almost everyone at the time. Rationing limited the amount of food you were allowed to buy at any one time. The army came first meaning that the rest of the people left in the United Kingdom had to make do with rationing. Conscription was another large shock during the war - despite being justified. Conscription meant that should the government see fit then they could call up any man they wanted to fight at any time they felt like. The extensive death lists also changed many people's views of the war. Some people shouted asking "is war really worth it? " Overall women were very grateful for the war in a sense as they found a type of respect. Besides this women over the age of 30 were now also allowed to vote (politically). Conscientious Objectors however were frowned upon, most people saw them as gutless cowards. The flu epidemic also changed a lot of peoples views on war as they saw thousands of people die with out even fighting. ...read more.