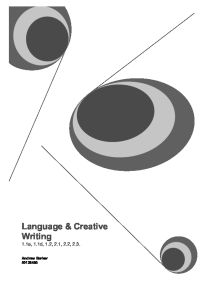 Creative writing and commentary. It was the year 2015 and Earth was exploring outer space when they discovered a new planet. The planet was very similar to Earth, the air was breathable, it had clear and clean running rivers and streams,

Language & Creative Writing 1.1a, 1.1d, 1.2, 2.1, 2.2, 2.3. Andrew Barker 50128485 The Trip to Floggolopia It was the year 2015 and Earth was exploring outer space when they discovered a new planet. The planet was very similar to Earth, the air was breathable, it had clear and clean running rivers and streams, the seas and oceans were crystal clear where you could see right down to the bed where the sand was a beautiful white colour and had beautiful brightly coloured fish and other life swimming all around. They met people that lived on the planet and they were very much like humans from looking like them right down to eating like them. The planet and Earth took the next few years learning about each other, their languages, cultures to the way of everyday life and became really close friends; one of the first things learned was the name of the planet which was called Floggolopia. In the year 2020 the two planets were able to visit each other and started to build state of the art holiday resorts for each other to stay in, with the floggolopians running the hotels on Floggolopia and humans running the hotels on Earth which gave all visitors more of an insight to each other's planets. Thirteen years on in the year 2033 there was the Lisbon family in the Isle of White. Daniel the father who was 46 and owned a highly established multi-planeterial technology company selling their goods to Floggolopia as well as Earth, Brenda the mother who was 48 and stayed at home as a housewife, their two sons, Patrick who was 19 and went to university to study Technology ready for when he took over his dads business as the other children were not interested in it, James who was 16 and went to college to study Art as he wants to become an Art teacher and their daughter Rachel who was 13 years old and went to secondary school but wasn't doing too well as she never listened and was always getting in trouble. ...read more.

Patrick took the drinks over to the table and sat back down and carried on drinking. Daniel said "Your mum is taking a while, I am going to go back up to the room in the minute and check on her, find out how long she is going to be. Will you be alright keeping an eye on these two for me Patrick?" Patrick said "Ok, tell her to hurry up and get down her, I'm hungry, oh and these two will be just fine" Daniel finished his drink and left the bar, he made his way back up to the hotel room. When he got there he went in and called out to Brenda but there was no answer, he went over to the bedroom and opened the door to see if she was in there but she wasn't so he went to the bathroom door, he knocked on the door as he knew that she didn't want to be disturbed but there was no answer so he opened the door. There she was, Brenda was dead, she had been savagely attacked and killed, and her body was in pieces, her arms, legs and head had been ripped off, she had big chunks out of her body that looked like they had been bitten out of her as if something had been eating her, there was blood everywhere, sprayed up the walls, the bath was overflowing as the taps were running and the mixture of water and blood was covering the whole of the bathroom floor. Daniel fell to his knees, he was in floods of tears, and then something snapped in his mind, he got up and grabbed the phone, and he dialled the number for the Floggolopian Police. When they answered he cried to them "My wife, my wife, she's dead, somebody killed here, help me please" The officer on the phone started laughing "Calm down sir, there is no need to panic about it, soon enough you will be with ...read more.

At the point when she meets Ramani her attitude changes and turns her more in to a love school girl where she meets him for the first time in the shop and can't help but gaze into his "deep purple eyes" and where she turns "as red as a beetroot". When her mother gets killed, she finds out she becomes scared and realizes what else is going to happen and even more so when people start being killed all around them "Rachel screamed and pointed behind Daniel, he turned around and behind him there were three floggolopians with a crazy look in their eyes, suddenly, there was a lot of screaming coming from behind them, and Rachel looked round and saw everybody was being attacked and she started screaming in fear again". After she and Ramani is in the emergency pod, she seems to calm down as they are away from the planet and she turns back slightly into the love sick school girl but is also very upset about what has happened to her family and she thanks Ramani for being there and looking after her and cuddles up to him and falls to sleep "Rachel laid down and went off to sleep, Ramani sat there and watched her sleep, she was slightly jumping as if she was dreaming". At the end of the story when it becomes clear to her that she is also going to die by the hands of Ramani she turns to Michael for help as she is scared, for example "Rachel looked at Michael "Don't let him hurt me Uncle Mike, please" but when she realizes that Michael is also part of it all she knows she has no hope for herself but doesn't have time to show any emotion as she is killed instantly "Michael looked at her and smiled, and then he looked at Ramani and said "Hello son, it's really good to see you". ?? ?? ?? ?? Andrew Barker 50128485 Access To Higher Education - Teaching Pathway 15 ...read more.