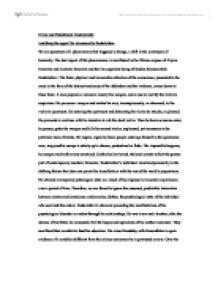 Crime and Punishment, Dostoyevsky - Justifying the appeal for clemency for Raskolnikov

Crime and Punishment, Dostoyevsky Justifying the appeal for clemency for Raskolnikov We are spectators of a phenomenon that triggered a change, a shift in the continuum of humanity. The dual aspect of this phenomenon is manifested in the lifeless corpses of Alyona Ivanovna and Lizaveta Ivanovna and the live cognizant being of Rodion Romanovitch Raskolnikov. The finite, physical and irrevocable reflection of the occurrence, presented to the court in the form of the distinct testimony of the defendant and the evidence, comes down to these facts: A man prepares a means to convey his weapon, and a ruse to mollify the victim's suspicions. He procures a weapon and makes his way, inconspicuously, as rehearsed, to the victim's apartment. On entering the apartment and distracting his victim he attacks, as planned. He proceeds to continue with his intention to rob the dead victim. Then he hears someone enter; he pauses, grabs the weapon and kills his second victim, unplanned, yet necessary in the particular turn of events. ...read more.

Witnesses have testified to his spontaneous, consistent acts of generosity and compassion. Raskolnikov, who carried the axe into the pawnbroker's apartment, is the same person who used his last resources to support a poverty stricken consumptive and his invalid father. Raskolnikov, who struck repeatedly the head of an old helpless crone, is the same person who scorched himself by rescuing two small children from a devastating fire. Raskolnikov who walked away nonchalantly from the scene of the murders is the same person who spent the last of his money to get a poor, useless drunk home before he took his last breath. These contradictory circumstances only go to prove that Raskolnikov committed the murders in a pathological state of obsessive-compulsiveness, completely unaware of his actions and their consequences. His predisposition to obsessiveness is obvious through his compulsive study habits. As in many psychological conditions, trauma triggered Raskolnikov's obsessive compulsiveness. The death of his fianc�, the state of destitution that kept him from studying, the pressure he felt from his mother, the guilt he felt for allowing his sister to sacrifice her life for him affected him deeply. ...read more.

The timing of his confession, when he could have easily forgone any responsibility for his actions, confirms that the murders were only a result of a mental instability, temporary and induced by trauma. One thing is certain; time cannot be reversed. We cannot return to a time when an irate, parsimonious crone reigned in her apartment, cheating clients of deserved prices, and abusing Lizaveta, her own blood, mentally and physically. We cannot return to the time when an impoverished youth wandered the streets of Petersburg, fighting, unawares, a dormant mental illness, berating the worth of his life and his place in the world. However, now, we have a man, who will probably never pick up a weapon again, but, who might still have a life to live, who might still contribute something to humanity. Locking him up forever would only make him crawl back into the dark recesses of his mind, bringing out a horror that is unimaginable today. What Raskolnikov needs is some air to breathe, a reason to endure, and a second chance. ...read more.