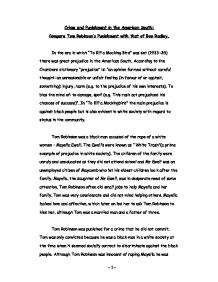 Crime and Punishment in the American South - Compare Tom Robinson's Punishment with that of Boo Radley.

Crime and Punishment in the American South: Compare Tom Robinson's Punishment with that of Boo Radley. In the era in which "To Kill a Mocking Bird" was set (1933-35) there was great prejudice in the American South. According to the Chambers dictionary "prejudice" is: "an opinion formed without careful thought: an unreasonable or unfair feeling (in favour of or against, something): injury, harm (e.g. to the prejudice of his own interests). To bias the mind of: to damage, spoil (e.g. This rash act prejudiced his chances of success)". In "To Kill a Mockingbird" the main prejudice is against black people but is also evident in white society with regard to status in the community. Tom Robinson was a black man accused of the r**e of a white women - Mayella Ewell. The Ewell's were known as "White Trash"(a prime example of prejudice in white society). The children of the family were unruly and uneducated as they did not attend school and Mr Ewell was an unemployed citizen of Maycomb who let his eldest children look after the family. ...read more.

This was because the law in Maycomb was a "White Law" which therefore meant that it was very unjust. Conversely Boo Radley was let off his punishment because he was white, even though he was guilty. Boo Radley was a white boy accused of drunken joy riding and stabbing his father with a pair of scissors. Boo Radley was a mysterious figure that no one knew much about, who had not been seen for years. Many of the children's games revolved around "Making Boo Radley come out." The children were fascinated with Boo Radley especially Jem. " Boo was about six-and-a-half feet tall, judging from his tracks, there was a long jagged scar that ran across his face; what teeth he had were all rotten; his eyes popped, and he drooled most of the time." This shows the kind of reputation that Boo had gained throughout the years and what the people in Maycomb thought of him. Boo received a punishment in a very different way to Tom Robinson. Boo Radley's father told the judge that he would be responsible for punishing Boo. ...read more.

Both Tom Robinson's and Boo Radley's punishment were disproportionate to the crime involved. Tom's punishment was too severe because he faced death for a crime that he did not commit; similarly Boo's punishment was also too large for joy riding because he should not have been totally outcast from society for a crime that he committed as a young boy. In Maycomb any white person would to be treated more kindly than a black person because that was seen as correct in society during that era. In the court The judge would have been white and the jury would have consisted mainly of white people. The punishments of Boo Radley and Tom Robinson would have been a personal interpretation of the law, for each individual member of the jury. "Mr Underwood simply figured it was a sin to kill cripples, be they standing, sitting, or escaping. He likens Toms death to the senseless slaughter of songbirds by hunters and children." In a town like Maycomb the highest black people were always going to be regarded as lower than "White Trash", however immoral, unjust or wrong this point of view was - and still is. "Remember it's a sin to kill a Mockingbird!" - 1 - ...read more.