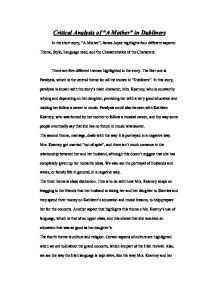 Critical Analysis of "A Mother" in Dubliners In the short story, "A Mother", James Joyce highlights four different aspects: Theme, Style, Language used, and the Characteristics of the Characters. There are five different themes highlighted in the story. The first one is Paralysis, which is the central theme for all the stories in "Dubliners". In this story, paralysis is shown with the story's main character, Mrs. Kearney, who is constantly relying and depending on her daughter, providing her with a very good education and making her follow a career in music. Paralysis could also be seen with Kathleen Kearney, who was forced by her mother to follow a musical career, and the way some people eventually say that she has no future in music whatsoever. The second theme, marriage, deals with the way it is portrayed in a negative way. ...read more.

Certain aspects of culture are highlighted when we are told about the grand concerts, which are part of the Irish revival. Also, we see the way the Irish language is kept alive, like the way Mrs. Kearney and her friends say good-bye in Irish. As for religion, we find out that Mr. Kearney was very religious and he often went to church by himself. The final theme is materialism. This is to do with the way Mrs. Kearney is opportunistic, and how she is persistent with her daughter receiving money for all her performances. Joyce uses a satirical writing style in this story. This means that he is "making fun" of the characters indirectly/subtly. For example, the narrator refers to the concerts as "grand", when in reality they are a failure, and the way Mr. ...read more.

Kearney out of spite... She was educated in high-class convent...), and speaking on behalf of the characters (People said... she was a very nice girl...). When reading the story, we reach a few conclusions about the characters. Mrs. Kearney is revealed as a snob, conceited woman living in middle-class Dublin, and received a high-class education. We see that she has a harsh and cold attitude ("Her ivory manners were admired... She sat among the chilly circle of her accomplishments"). Mr. Kearny is a pious and sober man, he does not have a romantic relationship with his wife (not enough love), but he is always there to help and support his wife. Mr. Fitzpatrick represents the negative side of the male characters. Because of him, the concert ended in failure. In this story, Joyce has highlighted many aspects, ranging from themes to style, and he elaborated on them with detail, which helps the reader understand the way he portrays "real" life in Dublin. ...read more.