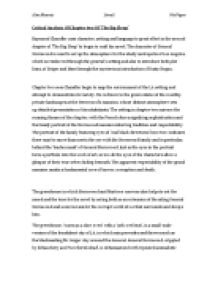 Critical Analysis Of Chapter two Of The Big Sleep

﻿Alex Morris 1twoS Mr Piper Critical Analysis Of Chapter two Of ?The Big Sleep? Raymond Chandler uses character, setting and language to great effect in the second chapter of ?The Big Sleep? to begin to craft his novel. The character of General Sternwood is used to set up the atmosphere for the shady metropolis of Los Angeles, which is reinforced through the general?s setting and also to introduce both plot lines, of Geiger and then through the mysterious introduction of Rusty Regan. Chapter two sees Chandler begin to map the environment of the LA setting and attempt to demonstrate its variety. He is drawn to the great estates of the wealthy, private landscapes at the Sternwood?s mansion, whose distinct atmosphere sets up detailed presentation of its inhabitants. The setting in chapter two mirrors the running themes of the chapter, with the French doors signifying sophistication and the family portrait of the Sternwood mansion inferring tradition and respectability. ...read more.

Sternwood has ?hair?like wild flowers fighting for life on a bare rock? and uses his strength ?like a showgirl uses her last stockings?. This wonderfully dark language thick with sleazy connotations further degenerates the old man, in the same way that he has been devoured by the corruption surrounding him. This idea of corruption amongst a jungle setting draws parallels with Joseph Conrad?s ?Heart of Darkness?. Both tell of idealists whose adventures seemed destined to bring them in contact with some kind of truth but these lovers of truth learn that the only way to deal with the horror they have exposed it to bury it once again with a lie, a lie that leaves the hero perhaps wiser but also more bitter. The greenhouse not only houses the decaying general but the humid surroundings feature thick with festering orchids, crowding like the crooks of LA round the general, who describes them as nasty but seems overcome by them, ?closing his eyes? at their mention. ...read more.

The work he does is dirty but he maintains his own moral code.? He keeps his cards close to his chest when he needs to in chapter two but also talks openly with the general about being fired for insubordination and his marital status, not with a calculated double standards like so many characters in the book and charging just twenty five a day ?and expenses if? lucky? for his services. It is clear that Marlowe ?doesn?t suffer from many inhibitions? and is much more than a ?bit of a cynic? as the general mildly puts it, in his clash with the butler at the end of the chapter. His sharp, witty jibes to the butler, such as ?that will save you from a pauper?s grave? and his abrupt directness of ?I don?t like that?, provokes a frosty reception from the butler with his unethical approach. Chandler uses chapter to two begin to effectively craft his, setting the reader expectations, suspense and a creating a dark tone and setting. This is done through the characters of Sternwood and Marlowe, their interaction and their backdrop. ...read more.